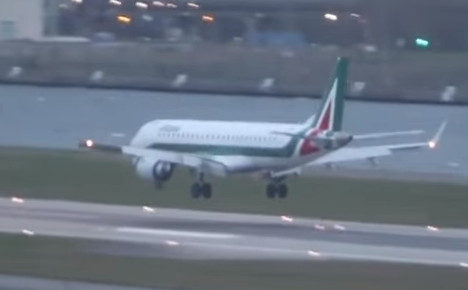 The Alitalia flight as it tries to land at London's City Airport. Screengrab: CCTV Live Views

The video below captured the plane being violently swayed from side to side as the pilot attempted to land at City airport.

The plane then bounces off the runway before being taken back into the air, while still being thrust around by the so-called Storm Imogen.

The flight took off from Milan's Linate airport more than an hour late and was due to land in London at 3.35pm. It eventually arrived safely shorty after 5pm.

The winds reached up to 160kph, leaving thousands of homes across the UK without power.