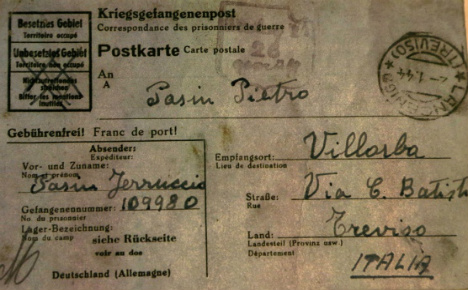 Italian military officer, Ferruccio Pasin, was captured by Axis forces in Lancenigo, near the Veneto town of Villorba in late 1943 – shortly after Italy had surrendered to the Allies and declared war on Germany, La Nuova di Venezia reported.

Nazi forces deported him and other Italian prisoners to a military internment camp at Luckenwalde, 52 kilometers south of Berlin. From there he sent a postcard home, reassuring his family he was still alive.

“Dear Father,” begins the letter, “I find myself well at the camp and hope you are doing well too. Let me know how things are back home. Don't worry about me, I hope to embrace you again soon. Send everyone my love, Ferruccio.”

But the letter was never delivered. A postmark shows it arrived in Treviso on January 2nd 1944 but was lost amid the chaos of war.

The letter stayed lost, until it was recently found in post office archives by a researcher.

Once found, the letter could not be delivered because 'Via Batisti' – where Ferruccio's father once lived – no longer exists. Fortunately the researcher was able to track down the soldier's next of kin with the help of postal workers who knew the local Pasin family well.

“I was at the grocery store when a man who said he was a researcher came up to me and told me he had a letter from my father,” Mario Pasin, Feruccio's younger brother of 16 years explained.

“I told the man that Ferruccio had, in fact, been my brother…and a few days later the letter was delivered.”

Ferruccio survived his ordeal at Luckenwalde – but the experience had scarred him for life.

He died in 1981 aged 66, with the arrival of the letter from beyond the grave causing great excitement among his surviving family members.

His sibling quickly passed the news on to the six of Ferruccio's eight surviving children, who rushed over to their uncle's house to see the faded yellow letter written in their father's hand.

For daughter Anna, seeing the letter brought back vivid memories of her father's homecoming in 1945. “I was two when he came home from the war,” she explained.

“When I saw him I ran to hide under the bed because he looked like a tramp, he had a beard and was wearing rags. His hands and feet were freezing. He was 1.8 meters tall but weighed just 37 kilograms.”

“Occasionally, in the years that followed, he would run down to the granary shouting 'they want to take me away!'” Anna recalled.

To make it back to Italy after the war, Ferruccio fled Germany by grabbing on to the undercarriage of a train bound for Verona. From there he walked the 148 kilometers home to Villorba.

Now more than 72 years after his agonizing journey, his letter has finally made it home too.