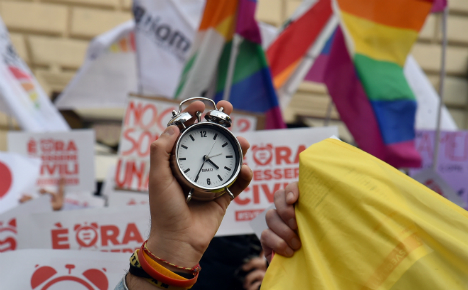 A Northern League councillor has said he would burn his gay son. Photo: Alberto Pizzoli/AFP

Giovanni De Paoli, a regional councillor in Liguria, allegedly told the group during a council meeting on health and safety security in Genoa: “If my son was gay, I would throw him in a furnace and burn him.”

The allegation was made by Giovanni Vianello, the head of Agedo, a group of parents of gay people based in Genoa, who were at the meeting.

“It made my blood run cold,” Vianello told Ansa. “It gave me goosebumps and made me think of Nazi concentration camps.”

The alleged comments were also slammed by Donatella Albano, a senator with the Democratic Party.

Ansa quoted her as saying that the words were made worse by the fact that they were “not uttered at the corner bar, but within the confines of a regional institution by an institutional representative.”

But De Paoli denied the allegations later on Wednesday, telling Il Secolo XIX that he had been misheard.

He claims he said: “If my son was gay, I WOULDN'T throw him in a furnace and burn him.”

He also said the incident was a “storm in a tea cup” and that he is the victim of an attack by those who oppose the civil unions bill.

The allegations came on the same day Italy's Senate starting voting on the controversial bill which, if passed, will finally extend partnership rights to gay people living in Italy.