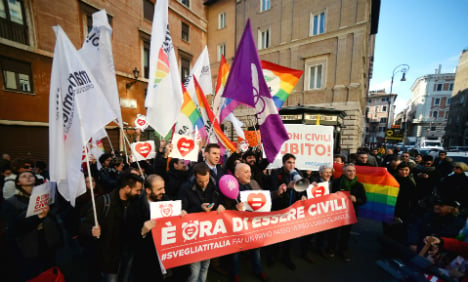 The bill is currently before the Italian Senate, which is due to begin voting on it on Tuesday amid real uncertainty over whether its provisions giving gay couples adoption rights will survive.

The head of the Italian bishops' conference, Angelo Bagnasco, on Thursday urged lawmakers in the second chamber of parliament to allow secret voting to ensure they really followed their consciences.

Renzi, who has been uncharacteristically quiet on an issue that has divided the political class, reacted pithily on Friday, revealing hitherto unsuspected strong backing for the legislation.

“Parliament decides whether or not to allow secret votes not the CEI (the bishops' conference),” Renzi said.

Italy is the only major country in Western Europe which does not offer legal recognition of gay relationships.

Public opinion has moved decisively in favour of civil unions in recent years as neighbouring countries have legalized gay marriage. But the question of adoption rights is much more divisive.

If the Senate approves the bill it will then move to the Chamber of Deputies for consideration.