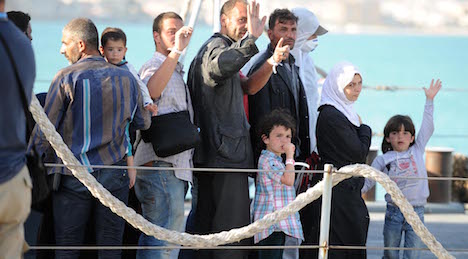 Isolated, poor and with an elderly and dwindling population, Sutera might not seem such an attractive proposition for housing migrants. But it is one of many places in Italy in which local residents have thrown open their doors to some of the thousands of refugees who continue to land on the country's beaches.

In countries like Germany and Sweden, looking after refugees has mainly been the job of the state. Italy too has built scores of reception centres to handle the influx. But many Italians have given asylum seekers a much more personal welcome. Sutera's refugee programme is now being held up as proof that integration can work even in the least likely of places.

Mayor Giuseppe Grizzanti decided to open the town's doors to refugees after the tragic Lampedusa shipwreck in October 2013, in which 366 migrants died.

Today, Sutera is home to 34 refugees from the Middle East and Africa, including a number of children, all of whom live with local families.

Grizzanti compares their experience to that of Italians arriving on New York's Ellis Island more than a century ago – some of whom came from Sutera.

“Historically, Sutera – and indeed Sicily – has been an island of emigration,” Grizzanti told The Local.

“But the refugee crisis offered us a change to rejuvenate our town by becoming a centre of immigration.”

Unlike in other Italian towns and cities where migrants are placed in vacant buildings on the edge of town and left to fend for themselves, in Sutera each refugee is entrusted to a local family charged with helping them to integrate.

The policy has three strict rules: no alcohol at home, total respect for privacy and cleanliness and perhaps, most importantly of all, compulsory Italian lessons.

The lessons are organized at Sutera's two schools each week. Adults and children get separate lessons.

Lessons are taught by volunteers like Mario Tona, a retired teacher using his free time and expertise to make sure that refugees get off to the best possible start in Italy.

Sutera is one of many places in Italy – most of them on the poor south – where locals have been conspicuously generous to refugees. In the mining town of Carbonia in Sardinia, locals dipped into their pockets to buy migrants phone cards and cigarettes.

In Satriano in Calabria, the local mayor has renovated derelict homes in the hope of persuading some of the refugees to stay.

But can the migrants eventually help repopulate Sutera?

“Not at all,” says Grizzanti. “I don't think we will be taking any more because we will become stretched. Although we have exported the programme to the neighbouring town Milena – which has just accepted 25.

“The economic reality of life in the town means that most of the refugees will only ever find a short-term home here.”

“It takes around two years for their asylum claims to be processed,” he added.

“After that I expect they will move to a city like Milan or Turin to find work like most of our young people have been forced to do. But this project is not about Sutera – it's a humanitarian project.”

Yet the town is still reaping benefits. Hosting the migrants means a windfall of €260,000 a year  – money which has helped boost the local economy. Six local people are employed full-time in running the hospitality project and looking after the refugees' needs.

One such woman is 28-year-old Mariella Cirami.

“I have a new window on the world each day,” she told La Stampa, while underscoring how the project had changed the atmosphere in the city.

“The few children in the town are now playing in the streets with the refugees.”

Last August, the town even celebrated a “festival of hospitality” at which its melting-pot nature was on full display as refugees shared traditional food, music and dances with the rest of village.

But despite the hugely positive nature of the experience so far, Grizzanti admits that many of the residents had strong reservations about the project before it began.

“Initially it unsettled many people especially some of the older residents,” he said. But tensions soon melted away.

In testament to the level of integration reached, Chris Richy, a recent arrival from Nigeria, played a wise man in the town's nativity – a locally famous event that attracts 15,000 visitors each Christmas.

“Here people are good, there's no racism. When I find work as an electrician I want to pay them back for everything they've done,” Richy told La Stampa.

“The only problem here is that it's isolated.”

The nearest city of Caltanisetta is an hour and a half bus ride away, over parched and winding mountain roads lined with fruiting cactus trees.

Before the project, Sutera was famous for being home to a €1.3 million 'white elephant' – a lift to nowhere, that never even opened.

Now it is making news for its exceptional humanitarian efforts during the greatest refugee crisis since the Second World War.