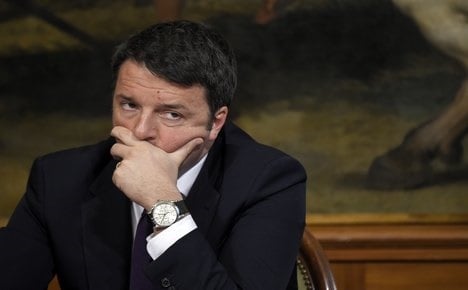 Matteo Renzi has regularly derided what he sees as the EU's misplaced emphasis on 'austerity'. Photo: Andreas Solaro/AFP

National statistics body Istat said total GDP for 2015 was up 0.7 percent on the previous year.

The Bank of Italy had last month forecast an expansion of 0.8 percent for 2015 with growth accelerating to 1.5 percent in both this year and 2017, broadly in line with the government's figures.

Istat said GDP expanded by only 0.1 percent from the third to the fourth quarter of last year.

That produced an annualised rate of one percent in the final three months of the year, significantly below most analysts' predictions of quarterly growth around 0.3 percent and an annual rate closer to 1.2 percent.

Finance Minister Pier Carlo Padoan admitted the 2015 figure was slightly lower than the government had hoped for. “But the important thing is the direction we are moving in, which is one of growth after three years of deep recession,” he told reporters in Brussels.

Analysts described the data as unexpectedly bad but not necessarily cause for alarm as a weakened euro, low energy prices and interest rates continue to underpin domestic consumption in the eurozone's third largest economy.

“The loss of momentum in the latter stages of the year was a surprise, particularly with the economy still enjoying the fruits of an extremely supportive external backdrop,” said Raj Badiani of economic consultancy group IHS.

“Italy is still struggling to emerge from the great recession of 2008-14 and despite some encouraging signs in the first part of 2015, growth lost momentum in the second half,” added Lorenzo Codogno, chief economist at LC Macro Advisors.

“However, there are plenty of signs of improvement,” he said, citing theweak euro's support for consumption and a strengthening jobs market.

Paolo Mameli, senior economist at bank Intesa Sanpaolo's research unit, was more downbeat, saying the risks for 2016 were mostly on the downside, partly because of doubts over corporate investment plans in light of an uncertain international outlook.

“Companies have seen their margins improve but they still seem dragged by uncertainty,” he wrote in a note to investors.

Prime Minister Matteo Renzi defied the European Commission's advice at the end of last year by pushing through a tax-cutting expansionary budget which means Italy's deficit will be reduced at a slower pace than previously agreed.

The government projected a deficit of 2.2 percent of GDP when it unveiled the budget and has since raised its forecast to 2.4 percent, still well under the ceiling of three percent set in the EU's Stability Pact.

But economists have warned that any further slippage could push back the point at which the country's debt, equivalent to more than 130 percent of GDP, begins to fall.

Renzi has regularly derided what he sees as the EU's misplaced emphasis on 'austerity' economics, arguing that the focus should be on bolstering demand to stimulate growth rather than cutting spending.

This week alone has seen him compare the EU to both a sinking ship and to a doctor administering useless drugs to a terminally ill patient.