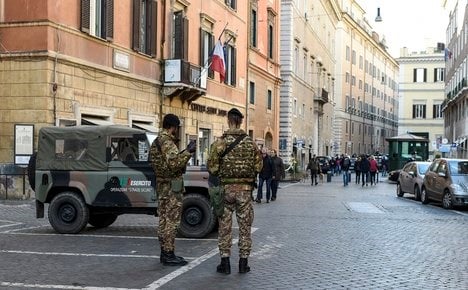 Italy has been on high terror alert since the Paris attacks in November.

While there has been “no specific or concrete information” about an attack, Alfano said “this does not make us rest easy”.

“We have information that shows the risk is very high; information and analysis that indicates the war in Syria and instability in Libya are dangerous for the whole of Europe,” he told RaiTre’s In mezz’ora.

Some 259 people were arrested on terror charges in Italy in 2015, with 67 of them being expelled from the country as a result. Several others have been arrested since the start of the year.

Alfano said that 86,000 people were checked in 2015. Security was tightened in the wake of the Paris attacks, with soldiers patrolling streets and key monuments. Security has also been stepped up at train stations, airports and borders.

Prime Minister Matteo Renzi said in November that Italy would spend an additional €1 billion on security.

“No continent has been spared over the last 15 years,” Alfano said.

“Italy’s strength is the prevention work being done to keep our country safe,” he added, while reiterating that there was no “zero risk” of an attack.