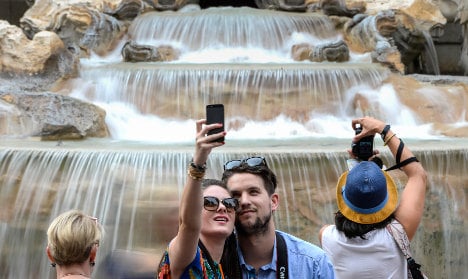 Lengthy guidebooks and enormous maps not only take up more than their fair share of your baggage allowance, they often contain out-of-date or confusing information – and they don't exactly help you blend in with the locals.

Luckily, these days you can have all the information you'd ever need in your pocket, allowing you to pack more into both your suitcase and your trip. We've rounded up the essentials for a holiday to Rome,

Rome’s many fountains aren’t just beautiful to look at, they can also save tourists money in the often scorching heat. But that doesn’t mean you can dip your water bottle into the Trevi Fountain for a quick refill. Use this guide to locate the city’s drinking fountains, called nasoni (‘big noses’ – due to the shape of the spout).

The water is perfectly clean and safe – in fact, it’s the same stuff that comes out of Rome’s taps. Just be aware that this summer, authorities are turning off some of the fountains temporarily due to drought problems.

If you want your visit to go beyond the tourist staples of the Colosseum, Roman Forum and the Pantheon, download this free guide to Rome’s street art. With descriptions and information about more than 100 artworks dotted around the city, this app will help anyone seeking an alternative taste of Roman culture, far from the masterpieces you’ll find in the museums.

Rome is sadly not known for its provision of public toilets, so getting caught short can be stressful. WC Rome shows you the nearest public loos, with addresses, opening hours and navigation to over 120 toilets in the city, meaning you no longer have to waste valuable sightseeing time hunting for a café with a clean toilet and sympathetic owner. You can update the map to ensure it helps even more users.

There are plenty of travel guide apps for the eternal city, but Ulmon’s is the highest rated and The Local's recommendation. It includes offline maps, information on thousands of attractions, restaurants and hotels plus insider tips from tourists and locals alike. GPS services and all of the content are available offline after the initial download, meaning you won’t have to shell out for pricey roaming charges.

There are plenty of five star reviews, including this one from Chris Archambault: “I highly recommend downloading this app if you're travelling to Rome!”

Many tourists remain mystified by Rome’s buses and fail to take advantage of them, which is a shame because they cover much more of the city than the metro system. They're particularly useful in the summer as a rare source of air conditioning!

This app simplifies the system, helping you to locate your nearest stop, get real time updates (don’t be surprised if the times are different from those on display) and plan your connections. You could also try Muoversi a Roma, the city’s official transport app, which also covers the metro, though this has mixed reviews, or CityMapper, a global app which covers public transport and also gives options for cycling, taxis and walking.

This audio guide is GPS-activated, meaning you can learn about the history behind Rome's many monuments and attractions without having to stop to leaf through chunky guidebooks. It will also alert you to nearby curiosities you might otherwise easily have missed.

It covers a wide range of attractions, from the obvious sights to more quirky things and little-known facts, as well as local tips on places to eat and drink. You can choose tours on a variety of themes, either listening to them for free online (but bear in mind roaming costs) or paying to download them. Perhaps the most exciting part is that you can later download a personalized 3D video of the sights you passed on your walk.

It's had plenty of rave reviews, and user Minda Miller described it as “better than the audio on the tour bus”.

This handy app takes at least some of the stress out of travelling with children. As well as information about attractions and events in Rome and the Lazio region, which range from parks to zoos and museums, you can also get information about which restaurants and hotels are most family-friendly. And just in case of emergency, it can also direct you to the nearest shops for baby or child items, the pharmacy, or children’s hospital.

This free app has 30 lessons which are focussed on teaching short sentences applicable to real-life scenarios. There's an abundance of language-learning apps out there, but for a free version which is geared towards tourists rather than those aiming at perfect grammar, this is one of the best. Using a combination of audio and text, you’ll be able to read menus and directions as well as ask simple questions before your holiday's over.

One review, by Marie Machado, says: “It's just fantastic, thanks for sharing your work. I am very happy!!!

ezTaxi allows you to book and pay for cabs – the service finds you nearby drivers, meaning you avoid taxi queues, and checking prices in advance helps you avoid tourist rip-offs. If you’re looking for alternatives, you can also use Uber in Rome.


This app proves useful before you’ve even arrived in the Italian capital, offering up-to-date flight tracking for both Fiumicino and Ciampino airports. You can also find information about your destination and options for contacting your airline.