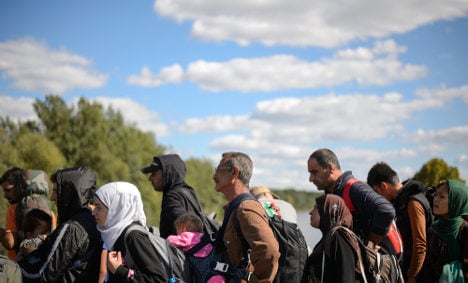 The measures will be implemented at 12 existing checkpoints along frontiers with Italy, Slovenia and Hungary to slow down the influx, Interior Minister Johanna Mikl-Leitner said.

“There will be different structural measures from containers to further barriers” similar to the short mesh fence recently set up at Austria's main border crossing with Slovenia at Spielfeld, she added.

The announcement is a new blow to German Chancellor Angela Merkel who wants to promote a deal with Turkey at an upcoming EU summit to tackle the continent's worst migration crisis since World War II.

Austria still supports the plan but says progress has been sluggish in the face of the huge flow, which shows no sign of abating.

“We are preparing Plan B not because we want it, but because the implementation of a European solution is too slow,” Chancellor Werner Merkel told Austrian media on Tuesday.

Vienna has also joined the so-called “Visegrad Four” group – Hungary, Poland, Slovakia and the Czech Republic – in their push to close the Balkans refugee route by shutting off Greece, which they accuse of failing to protect the EU's external borders.

Merkel on Tuesday strongly criticized the proposal: “Do we really want to give up already and close the Greek-Macedonian-Bulgarian border, with all the consequences this would have for Greece and the European Union as a whole and therefore the Schengen area?”

Austrian controls will be increased at checkpoints in the states of Carinthia, Styria, Burgenland as well as Tyrol, which shares a border with Italy.

“The aim is to secure the order and stability of our country. That's why we put the brakes on,” Mikl-Leitner stressed.

The government also plans to create on Wednesday a daily cap on the number of migrants allowed into the country at Spielfeld, she added.

As a result, the Austrian government expects the migrant flow along the Balkan route to possibly be diverted from Slovenia to Italy.

“We need to prepare for that,” the interior minister said.

Austria has taken an increasingly hardline stance after receiving 90,000 asylum claims in 2015 – one of the bloc's highest rates per capita.

Vienna already warned last month it would limit this year's number of asylum seekers to 37,500 and deport at least 12,500 people.

The government has however not yet specified what it plans to do once the cap has been reached.

Tuesday's announcement came hours after Greece – the migrants' entry point into the EU after they arrive from Turkey – announced that four of its five long-delayed migrant registration centres were “ready to function and welcome refugees”.

Athens faces effective suspension from the passport-free Schengen zone if it does not improve border controls within a three-month deadline imposed by the EU last week.

But Defence Minister Panos Kammenos on hit out at the ultimatum on Tuesday, saying: “The game of pushing responsibility onto Greece is now over.”

'Coalition of the willing'

In 2015, over a million people reached Europe's shores – nearly half of them Syrians fleeing a civil war that has claimed more than 250,000 lives.

A lack of systematic controls in the first EU countries they land in – either Italy or Greece – means most are able to continue their journeys to preferred destinations in northern Europe without being registered.

To halt the chaotic situation, Germany advocates a plan under which transit country Turkey would seal its borders and then fly refugees to Europe where they would be settled under an EU quota system.

Just before Thursday's full gathering of 28 leaders, Merkel and Faymann will host talks with nine EU leaders and Turkish Prime Minister Ahmet Davutoglu in Brussels to discuss the bid.

Confronted with the Visegrad group's anti-migration opposition, Merkel said last week there was “a group of countries” – dubbed “coalition of the willing” by German media – that may voluntarily accept more refugees in exchange for redoubled efforts from Turkey to tackle illegal immigration.