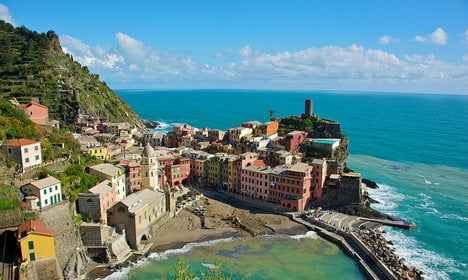 The town of Vernazza, one of the Cinque Terre. Photo: Daniel Stockman

The five colourful, terraced fishing villages that make up the Cinque Terre on the Ligurian coastline are visited by some 2.5 million tourists each year.

But experts say that number is choking the life out of the small towns of  Monterosso al Mare, Vernazza, Corniglia, Manarola and Riomaggiore, all located inside the Unesco World Heritage national park.

IN PICTURE: The beautiful villages of the Cinque Terre

This summer, park authorities will limit access to a fixed number of tourists, who will have to buy a special card online well in advance, although they are yet to establish what the figure will be.

They believe the number of visitors flocking to the area is already one million too high, and that the annual pounding is damaging the towns and the coastal walkways that link them.

“By summer we will have all the data we need to tell us how many tourists can walk each footpath on a given day according to weather conditions,” national park president, Vittorio Alessandro, told La Repubblica.

From summer 2016, should tourists arrive at a given footpath after the visitor limit has been reached they will not be allowed access until the following day.

“It seems like an eccentric idea, especially at a time when everybody else is trying to increase tourism and fill hotel rooms,” Vittorio Alessandro said.

“But as a national park, we should also serve an educational function and we want to reduce tourism numbers to a more sustainable level.”

Alessandro hopes the scheme will be active within three months when high-season begins.

The hope is that separate services will help improve congestion problems at the park's station between April and October, which make life a misery for residents and tourists alike.

“It puts security at risk, too” Alessandro explained. “We have trains racing past crowded platforms full of stressed passengers and huge queues where pickpocketing is common.”