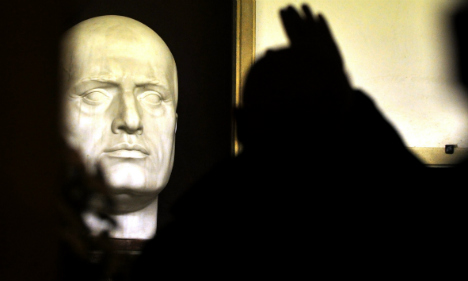 The museum will be located in the town where Mussolini was born. Photo: Tiziana Fabi/AFP

In the past, Italy has been criticized for never fully condemning the darkest episode in its recent political history.

As a result many people across Italy still hold some respect for the fascist dictator.

And according to La Stampa, the Italian government is readying €2 million to keep that episode alive by way of a museum in Benito Mussolini's home town of Predappio.

Critics say it will provide yet another focal point for neo-fascists, who already flock to the town each year in their droves.

Pro-Mussolini messages fill the visitor's book at his grave, while fascist pilgrims have spurred a roaring trade in all manner of right-wing paraphernalia, from Mussolini calendars to baby grows.

Some fear that the new museum will amount to nothing more than an expensive endorsement of fascism funded by public money – but organizers say they are keen to avoid this happening.

The museum is being pushed by Mayor Giorgio Frassineti, who told La Stampa that the project was not about celebrating Italy's notorious fascist dictator, but an attempt to “do something important for the history of our country.”

Luca Lotti, the under-secretary of state for the centre-left Democratic Party, visited the town in late January to assure local officials that the museum could count on government funding.

The museum would be housed in the former seat of the fascist party, a derelict building located 500 meters from the home in which Il Duce was born.

The site is just over a kilometer from Mussolini’s crypt, a place which already attracts thousands of neo-fascists each year. The total cost of the project comes in at some €5 million – of which another €2 million is expected to come from EU money, while the rest will be financed locally and through a private investment fund.

Organizers are keen to stress that the museum won’t take a positive view of the late dictator.

“We have collaborated on the project too,” said Carlo Sarpieri, president of Anpi, the national partisan's association which commemorates the men and women who fought against fascism during the Second World War and is advising on the project.

“We hope our presence can eliminate all celebratory aspects of the museum,” Sarpieri added.

“We will be keeping an eye on things to make sure it's done with the due historical and scientific rigour.”