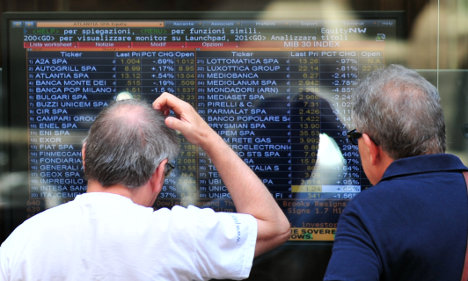 Italy's bank and corporate stocks have had a volatile start to the year. Photo: Giuseppe Cacace/AFP

It's been a bleak start to the year for Italy's economy, despite Prime Minister Matteo Renzi’s rapid reform efforts and a glimmer of hope in the middle of last year.

The only good news has been that consumer confidence reached a record high in January, although business confidence was at its lowest in almost a year.

Some might argue that Italy, often dismissed as a basket case, has always been listless and that a crash is a foregone conclusion.

When the country somewhat blindly joined the euro in 1999, the cost of living almost doubled overnight, as salaries stagnated.

But back then there were at least more jobs and bank credit was easier to come by.

The global financial meltdown of 2008 changed all of that, with Italy's economy limping along ever since. In fact, the size of the Italian economy is roughly where it was over a decade ago.

Bankrupt Greece might have stolen the limelight over the past few years, but Italy, Europe’s third-largest economy and the world’s eighth largest, has been closely watched.

And even more so now as the country teeters on the edge of a banking crisis and concern mounts that it could now go the way of its southern European neighbour.

And if Italy goes the way of Greece, the impact will be monumental, not just for Europe, but the entire world economy.

Here are five reasons why Italy is making the world jittery.

1. Banking crisis – depositors starting to pull their money out Banks across Europe aren’t in healthy state right now, but in Italy, the situation is far worse.

The number of “bad loans” – that is the number of loans that are not being paid back as per the agreement between the borrower and lender – held by Italian banks amounted to €200 billion at the end of December.

That figure that has been growing since 2008 and now amounts to a huge 17 percent of GDP.

The problem is, because of new EU rules, Italy can’t bail-out its banks, while an attempt to create a “bad bank” last year to relieve the Italian banking system of some of these toxic loans flouted state-aid rules.

This is why Renzi’s patience with the EU over the past few weeks has waned – he is constrained by EU regulations to fix the problem, but the EU, with its stringent austerity policy, won’t fix it either.

But what does this mean for you?

Firstly, it means that the more bad loans a bank has on its books, the less they have to lend to you and, crucially, to businesses that want to grow.

People are also starting to wonder how safe their money is in Italian banks.

Fabrizio Viola, the CEO of Monte dei Paschi, Italy’s third-biggest bank and the most troubled one, admitted in January that some customers had started to pull their savings out of the bank.

Although Renzi moved to reassure people that the country’s banking system is robust, the market volatility no doubt spooked depositors – especially with the suicide of an Italian pensioner, who lost his entire savings as a result of the “bail-in” of the four smaller banks in December – still fresh in their minds.

That said, some moves have been made to soothe the jitters.

Italy has managed to strike a deal with the European Commission to help its banks sell their non-performing loans. Although analysts have warned that the deal wouldn’t fully solve the problem, it will reduce potential losses.

The other positive news, according to analysts at Fitch ratings agency, is that Italian banks, despite the huge amount of bad loans on their books, appear to have “adequate solvency”, at least enough to avert total collapse. That’s the second highest in the EU, after Greece.

So unless Renzi wins more concessions from the EU, he will struggle to reduce that debt pile over the next year.

Here’s why: Italy’s recovery from recession has virtually stalled, and growth forecasts of 1.6 percent for this year are beginning to look unachievable.

Italy also just doesn’t get enough back in tax revenues – even though tax rates are among Europe's highest – to help alleviate the debt.

And the EU simply doesn’t have the money to rescue Italy in the way it did Greece. Italy has a dismal record when it comes to productivity – that means the amount of value a worker creates over time; a crucial element of a thriving economy.

Italian workers might be pulling longer days, but they’ve been producing less for over a decade.

This wasn’t always the case. Back in the 1970s, Italy thrived when it came to production.

But that growth dwindled thanks to low investment, a low-quality workforce and lousy governance in the decades that followed.

It doesn’t help that the labour market is still so highly regulated and the country still so heavily unionized.

The extent of Italy’s dismal productivity came to the fore more recently through the embarrassing exposés on the hundreds of public sector staff who’ve been shirking work to indulge in more appealing pursuits. All the while being paid.

Italy is also a country made up mostly of family-run, small or medium-sized businesses, which lack the funding to help them grow and make them more competitive. The abysmal rate of production has resulted in high unemployment, especially among Italy’s youth – i.e., the segment that is meant to be propping up the pension payments for Italy’s ageing population.

Leaders may have patted themselves on the backs when the jobless rate fell steadily over a four month period towards the end of last year, but it crept up again to 11.4 percent in December.

Youth unemployment might have fallen during the same month – most likely due to young people fleeing the country for work rather than jobs being created – but it was still at a very high 37.9 percent.

The situation is more acute in Italy’s southern regions, where the economy is even worse than that of Greece’s.

The south's gross domestic product declined for the seventh year in a row in 2014, while its economic output grew by just 13 percent between 2001 and 2014.

Such figures paint a picture of an ever-widening wealth gap between Italy's north and south, with one in three people at risk of poverty in the south, compared to one in 10 in the north.

A dwindling population is also hindering chances of a southern revival: in 2014, just 174,000 births were registered in the south – the lowest in 150 years.

Meanwhile, young people are fleeing in their droves, sick at the slow pace of change and lack of opportunities, something which threatens to turn many small southern Italian cities into ghost-towns.

Regulation, a shortage of jobs and an ageing population all play into the hands of Italy’s main economic killer: weak production.

Italy’s birth rate has more than halved since the ‘baby boom’ of the 1960s, with the number of babies now being born averaging about 500,000 a year.

A lack of jobs and money is preventing young people from leaving home and starting a family, while little has been done by the government to encourage people to have children.

Italians are also living longer, thus depending more on pensions, but with no jobs for the young people whose taxes are expected to fund them.