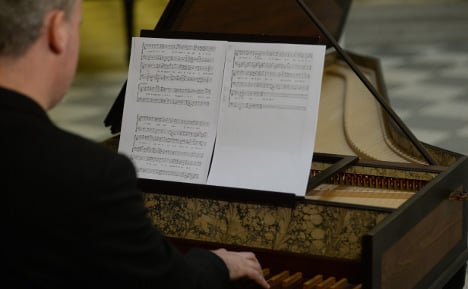 The Italian composer was allegedly so jealous of the Austrian prodigy that he once tried to poison him – a claim rejected by experts as the collaboration was performed in Prague.

“The part composed by Mozart is, shall we say, more ingenious and dramatic, while the other two verses are more lyrical,” musician Lukas Vendl told reporters after playing the four-minute composition on a harpsichord.

“But it's impossible to deduce from it who was a better composer.”

The cantata from 1785 is “key to a new understanding of the relationship between Mozart and Salieri,” according to Timo Jouko Herrmann, the German musicologist and composer who found the work.

Herrmann said it suggests the men were “colleagues who worked together” rather than rivals and undermines a legend suggesting Salieri may have played a role in Mozart's untimely death at 36 in 1791.

It accompanies a libretto by Italian poet Lorenzo Da Ponte and is dedicated to popular English soprano Nancy Storace (1765-1817), who returned to the stage after losing her voice for a spell.

The score lay unidentified in the Czech Museum of Music since the 1950s but Herrmann was finally able to attribute it to the two composers thanks to access to new information on the Internet, according to a museum statement.

Scores of the cantata had been distributed at the time by a Viennese merchant, Artaria and Comp. The Prague copy is the only one to have survived.

The discovery is especially interesting in light of a legend discounted by historians: Salieri was said to have fatally poisoned Mozart out of jealousy over the Austrian wunderkind's talent

“We all know the film 'Amadeus.' Salieri is mischaracterised in it,” said Ulrich Leisinger from the International Mozarteum Foundation in Salzburg.

“He didn't poison Mozart. The two composers regularly met up and collaborated in Vienna.”

The film was shot in the Czech capital, where Mozart spent considerable time in the 18th century as it was then part of the Austrian Empire.

Prague played host to the premiere of his celebrated opera Don Giovanni in October 1787, which later had a lukewarm reception in the empire's capital Vienna.

Mozart debuted another opera, The Clemency of Titus, in Prague in 1791.

“As far as I know, it's the only piece jointly written by Mozart and Salieri,” said Herrmann.

“But who knows: in a treasure house like this, anything can happen,” he said of Prague's music museum.