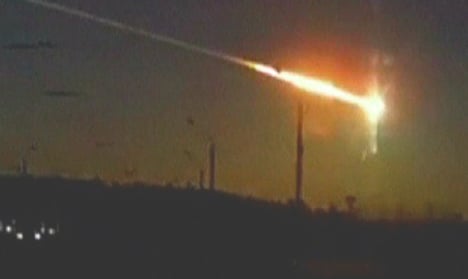 The fireball left a trail of vapour hanging in the sky for minutes.

Not long after the unusual event, pictures of bright flashes, vapour trails and eyewitness reports started to emerge on social media, with users suggesting they had witnessed a meteorite falling to earth.

The unidentified flying object lit up skies over northern Italy, travelling west to east from Genoa to Venice at around 6.19pm.

Sightings of the object were also reported from as far away as southern France and Switzerland.

La Repubblica reported a spike in phone calls made to Italy's fire brigade to report the phenomenon.

A photo of the vapour trail, captured on a road outside Genoa, was uploaded to the Italian citizen journalism website, YouReporter.

The trail over liguria. Photo: YouReporter

Angelo 1960 uploaded a photo snapped above town of Jesolo, showing a bright flaming object streaking through the sky.

“I saw it coming down rapidly, followed by a trail of smoke and fire,” he wrote.

Sightings of the object were not limited to Italy, with reports also emerging from as far away as southern France and Switzerland.

Twitter user Romain Magellan uploaded a pic of the object snapped above the ski resort of Valmorel in France.

Reports of Thursday's UFO are consistent with descriptions of a bolide – a small piece of rock or ice from outer space that burn up as they race through the earths atmosphere before hitting the ground.

Bolides are extremely bright objects – often with apparent magnitudes much brighter than the full moon.

According to American space agency Nasa, some 100 tons of dust, gravel, rock and ice enter the earth's atmosphere every day.