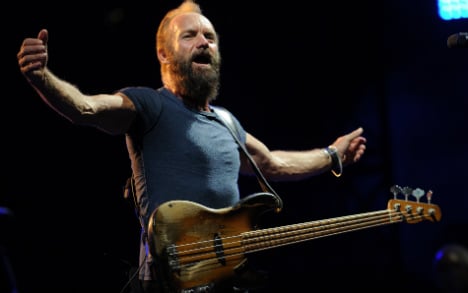 Sting has certainly been making the most of his Tuscan estate, Tenuta Il Paglio, which he bought from an Italian duke in 1998 for €3.5 million.

Back then it was just a dilapidated villa with 100 hectares of land.

But alongside wife Trudy Styler, the Englishman in Tuscany set about restoring the property, going on to acquire more land surrounding the villa at auction in 2003, for €6 million, with the aim of producing wine.

Over a decade on, one of the four wines produced at the estate  – Sister Moon, named after one of his songs – has been placed on an exclusive list of Italy's best wine, compiled by Wine Spectator, an American magazine.

According to Corriere della Sera, the inclusion means the wine will be on show, alongside those produced by the more established Frescobaldi and Marchesi Antinori, at the prestigious OperaWine, which takes place in Verona in April.

OperaWine is the first event of the long-running Vinitaly wine festival, which has been celebrating the best bottles Italy has to offer for 50 years.

Made from 40 percent Sangiovese grapes, 40 percent Merlot and 20 percent Cabernet Sauvignon, Sister Moon was the first wine produced on the artist's Tuscan estate in 2007.

A description of the wine on the estate's website boasts “aromas of black pepper and black licorice with blackberries”. The wine also “fills your mouth and then caresses your taste buds”.

Sting and his wife spend months each year at the property with their six children – often entertaining high-profile guests.

UK Prime Ministers David Cameron and Tony Blair have been spotted relaxing on the estate alongside American singers Madonna and Bruce Springsteen.

Sister Moon is also produced alongside three other reds, two of which are named after his hits (Message In A Bottle and When We Dance) and another called Casino Delle Vie.

Olive oil and honey are also produced at the estate, which has recently opened its doors to tourists.

Six cottages can be let in the grounds of the villa and the artist has been known  to entertain his guests with an impromptu acoustic set. But the experience doesn't come cheap –  seven days costs €7,000.