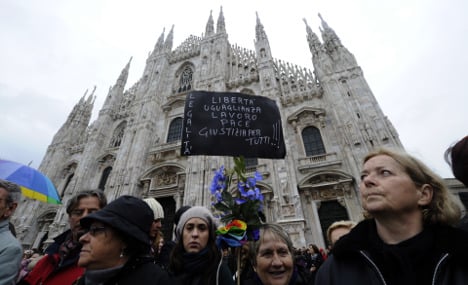 Milan demonstrators during a march to remember the victims of organized crime in 2010. Photo: Damien Meyer/AFP

Police seized hundreds of kilograms of drugs including marijuana from Albania, cocaine from Romania and hashish from Spain, all destined to be peddled in the south of the country by the powerful 'Ndrangheta organisation.

Prosecutor Alessandra Dolci said that the immensely wealthy group, credited with controlling much of the world's cocaine trade, was thriving because “sadly in very few cases the victims denounce its presence in the north”.

Police commander Canio Giuseppe La Gala in Milan joined Dolci in calling on “citizens to collaborate and help us by informing, so that the anti-mafia pool in Milan can immediately investigate and destroy the phenomenon”.

Of those arrested, 11 are accused of belonging to the 'Ndrangheta, with some having already spent years behind bars after being locked up in the 1990s under Italy's notoriously strict mafia prison regime.

As well as drug trafficking, the suspects are accused of extortion, usury and armed robbery.

Police said they busted the gang thanks to information provided by a businessman from Calabria who had initially thought to make a deal with the 'Ndrangheta when the crime group first attempted to illicit protection money from him.

“The testimony from Francomanno, the businessman, is very rare. His story shows that making deals with members of organised crime, with the hope of profiting, ends instead with being slowly swallowed up by the system,” Dolci said.

“In his case, he had decided to accept as a minority shareholder a convict who, from the inside and with mafia methods, managed to gnaw away at his company,” finally forcing him to sell for next to nothing, she said.

Over 140 people were ordered to stand trial at the end of last year for helping the group infiltrate the affluent north, including gangster bosses, businessmen and an ex-footballer who played for Italy when it won the World Cup in 2006.

Police believe the group – which they describe as the most active, richest and most powerful syndicate in Europe – uses legitimate activities in the north to recycle the huge amounts of cash their drugs business generates.