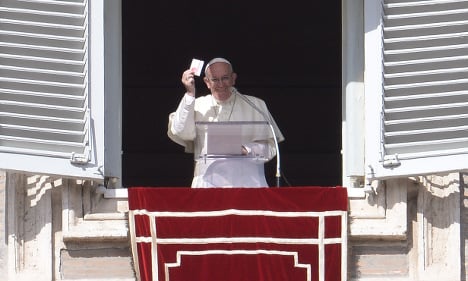 The only place Pope Francis's comments could have any significant bearing is in the United States. Photo: Filippo Monteforte/AFP

The specific request was made as part of a broader appeal for an international consensus on abolishing capital punishment, which did not refer to any particular territory or country.

But it could potentially embarrass Texas governor Greg Abott, a devout Roman Catholic who is a staunch defender of capital punishment in a state which has executed three of the seven prisoners put to death in the United States this year.

Three days after he described Donald Trump's immigration stance as un-Christian, the appeal puts the pontiff at odds once more with the Republican presidential hopeful.

Trump said in December he would seek to extend the use of capital punishment in the United States by making execution automatic for killers of police officers.

At his weekly audience at St Peter's, Francis said he was encouraged by signs that opposition to the death penalty is growing around the world.

“Modern society has the ability to punish crimes effectively without definitively taking away the possibility of redemption for those who commit them,” he said.

“The commandment 'thou shalt not kill' is an absolute one and applies to both the innocent and the guilty.

“A criminal also has an inviolable right to life, (which is a) gift of God.”

Francis has made mercy the dominant theme of the Church's ongoing Jubilee year and he urged governments which still authorise judicial killings to follow his lead.

“I appeal to the conscience of rulers so that we can reach an international consensus on the abolition of the death penalty,” he said.

“And I suggest to those who are Catholic to make a courageous and exemplary gesture by ensuring that no condemned prisoners are executed during this Holy Year of Mercy.”

Since most predominantly Catholic countries around the world have already abolished or suspended judicial killings, the only place Francis's comments could have any significant bearing is in the United States.

Judges are able to authorise executions in 31 American states or on the request of the federal government.

In Texas, the governor cannot block executions but he can reject recommendations for death sentences to be commuted to life in prison and also has a discretionary power to order 30-day reprieves for condemned prisoners.