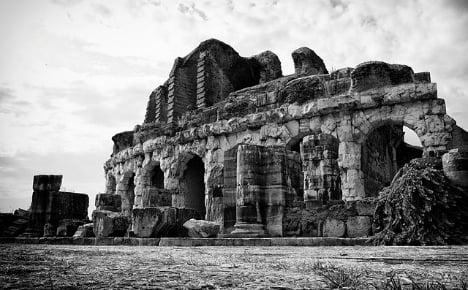 Italy is packed with incredible ruins you might not have heard of. Photo: Nicola d'Orta

The Anfiteatro Campano in Campania was built in the first century AD and is 49m high, with a circumference of 170 metres. It once hosted thousands of baying, bloodthirsty Romans who came to watch gladiators perform.

Although the ruin might not be quite as well preserved as the Flavian Ampitheater in Rome, a visitor ticket costs just €2.50 – some €10 less than the price of a visit to the Colosseum.

What's more, the Anfiteatro Campano was the arena in which legendary gladiator Spartacus led a slaves' rebellion against the might of the Roman Empire.

They do contain roman public toilets, homes, warehouses, tombs, shops and bars. If you're staying in Rome it's a much easier day trip than Pompeii and a great way to experience life in a Roman town without having to endure the hordes of tourists who flock to Italy's most-visited cultural site each day.


Part of the Roman forum in Aquilea. Photo: Wikimedia.

Today the town of Aquilea in northeast Italy's Friuli-Venezia Giulia region is home to just 7,000 people. But during antiquity it was one of the most important trading cities in the Mediterranean with a population of 100,000.

In fact, it was so large that much of the ancient city has not yet been excavated and lies buried under the countryside surrounding the town.

But Aquilea's Roman forum in the centre of town is extremely well preserved and it's easy to imagine how it buzzed with merchants and traders during the city's heydey.

Visitors can also find a museum filled with pieces found in the area around Aquilea, including ancient mosaics, ceramics, jewellery, bronzes and weaponry, which help paint a vivid picture of life 2,000 years ago.

It is thought that the plush Villa Oplontis in Campania once belonged to Emperor Nero. The house is certainly a fitting place for a nobleman.


The bikini isn't as modern as you might think. Photo: Kenton Greening

Located near the town of Enna in central Sicily, the Villa Romana del Casale is a Roman villa with some of the best preserved and finest examples of Roman mosaic art.

Expertly created mosaics provide fascinating insights into Roman daily life depicting the ancients at work and play. Curiously, one mosaic unearthed in 1960 shows Roman girls frolicking in bikinis. Its discovery came 14 years after Parisien designer Luis Rèard came up with the design for the iconic swimsuit.


Mosaics above the tomb of Queen Galla. Photo: Wikimedia

Ravenna is the town where Julius Ceasar gathered his troops before marching on Rome in AD 49 – but the city only really came into its own during the twilight of the Roman Empire.

It was even the Empire's western capital from AD 402 until its collapse in  AD 476. Owing to this the town provides many fantastic examples of late Roman art and early christian churches.

The Basilica di San Vitale is a unique blend of Roman, Byzantine and Baroque, while the Mauseleum of Roman Queen Galla includes a stunning scene of San Lorenzo in flames, which allegedly inspired poet Dante Alighieri to write The Divine Comedy.