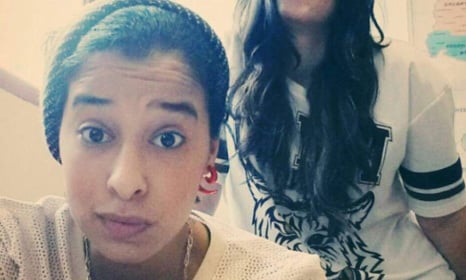 The family are now under police protection as security forces fear that the phone call could lead to miliants seeking revenge on her family. Il Mattino Padova reported that her parents are now getting increasingly worried about their daughter's safety.

Since this conversation in December, they have not heard from their daughter – the longest time they have gone without contact since the teenager left Italy to join the terror group in Syria last February.

In their last phone call, Rehaily asked for help and said she no longer wanted to fight for Isis.

Rehaily was allegedly radicalized online and worked as a so-called 'soldier of the information army' from February last year, assisting fighters who did not want to be traced over the internet.

On her social media profiles, under the name of Sorella Rim, she compiled 'killing lists' with heads of Italian police forces, including photos of them and home addresses.

She also expressed support for the Islamic State group, saying: “I do logistics. I feel useful here. We are terrorists and terror is part of our faith.. I have supported my State in front of a computer and I'm not turning back. If I had to, I would also do it on the battlefield.”

Her family at the time said she had been brainwashed and that she was a typical young girl who enjoyed school and spending time with family.

“The girl is in great danger, not only because she is in Syria, but to leave the terrorist group really means risking death,” Kamel Layachi, Veneto imam, told Il Gazzettino.