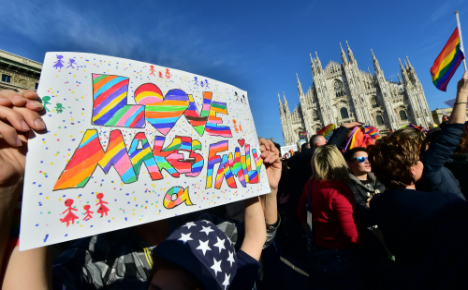 Matteo Renzi said he is ready to call a confidence vote over the issue of civil unions. Photo: Giuseppe Cacace/AFP

“We are at a crossroads,” Renzi told a national assembly of his centre-left Democratic Party (PD). “I am ready to call a confidence vote.”

In an unexpected direct intervention in a debate he has largely stayed out of, Renzi said he regarded the legislation to give gay couples legal recognition and protection for the first time as important as his other reforms of the labour market and the parliamentary decision-making process.

If he did call a confidence vote, Renzi would run the risk of losing it and having to go to the polls just as he enters his third year since becoming premier via an internal party coup.

But with the PD well placed in opinion polls, that would be a less daunting prospect for Renzi than for some of his political rivals.

The civil unions bill is currently stalled in the Italian Senate after the opposition Five Star Movement M5S last week scuppered a bid by the PD to accelerate its approval.

The second chamber of Italy's parliament is due to resume discussion of it on Wednesday, by which time Renzi's party managers hope to have secured enough cross-party backing to put it back on track.

At issue is whether the bill contains provisions allowing a partner in a same sex relationship to adopt the biological child of the other partner.

Italy's second biggest party, M5S has faced a significant backlash from its own supporters over its tactics in the Senate.

Gay rights groups, some of whom demonstrated in Milan on Sunday, have expressed dismay over the deadlock, insisting that the draft legislation will be worth little without equal adoption rights.

Opponents of the bill in the Senate have filed hundreds of wrecking amendments, most of which aim to remove the adoption provisions.

Opinion polls suggest most Italians favour the principle of allowing gay civil unions but that a majority are reluctant to extend adoption rights to same sex couples.

The Catholic Church has been extremely active in lobbying politicians on the question to the point of being publicly rebuked for interfering by Renzi earlier this month.