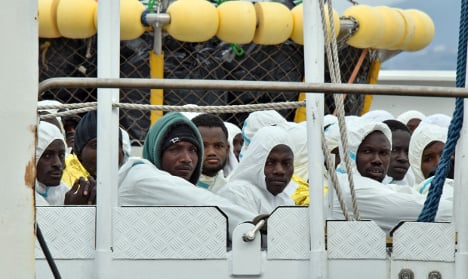 Navy ship Cigala Fulgosi raced to the rescue of three boats, recovering a total of 403 migrants and four corpses. While the cause of death was still unknown, dehydration on board and fuel fumes in close spaces have proved deadly in the past, especially to people weakened by journeys through the desert and crisis-hit Libya.

A second ship, the Bettica, picked up 219 migrants from two boats, while the Scirocco recovered 105 migrants from a rubber dinghy, the navy said in a statement.

Four days ago the coastguard spotted two bodies in the sea off Italy after some 40 migrants landed in Sicily.

Since the beginning of the year, 6,736 people have arrived in Italy via Libya, compared with 7,257 people during the same period in 2015, according to the Italian Interior Ministry.

The International Organization for Migrants (IOM) said Tuesday that over 110,000 migrants and asylum seekers have arrived in Europe since January, mainly in Greece, while more than 410 people have died or are missing at sea.