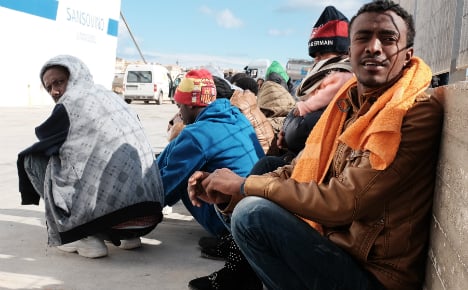 Migrants on the Italian island of Lampedusa. Photo: Alberto Pizzoli/AFP

The film, directed by Renzi's compatriot Gianfranco Rosi, won the top Golden Bear prize at the Berlin festival Saturday for its unflinching look at life on the Italian island of Lampedusa, the landing point for thousands of asylum seekers from Africa and the Middle East.

Renzi congratulated Rosi for the win in a regular news post on his website, saying: “I am for Italian cinema, which deserves all our attention. But so does the chosen theme.”

Ahead of a special summit between the EU and Turkey on the migrant crisis in early March, Renzi said he would be travelling “with 27 DVDs for the 27 heads of state and government. I hope they will find the time to watch it, and that after having seen it, it will be possible to discuss immigration in a different way.”

It is told through the eyes of a 12-year-old local boy, Samuele Pucillo, and a doctor, Pietro Bartolo, who has been tending to the dehydrated, malnourished and traumatized new arrivals for a quarter-century.

In chilling footage, Rosi accompanied coastguard rescue missions answering the terrified SOS calls of people on boats, most of them arriving from Libya. Many of the vessels are packed with corpses of people who suffocated from diesel fumes.