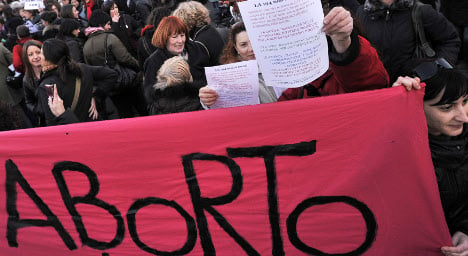 The sanctions have been lambasted by Italy's pro-choice activists, who have appealed to Prime Minister Matteo Renzi to swiftly abolish them.

“These fines are damaging to women,” Dr. Silvanna Agatone, president of the Free Italian Association of Gynaecologists, Laiga, told The Local.

Abortion has been legal in Italy since 1978, but many women are forced to have their pregnancies terminated in secret because of the growing number of doctors who refuse to perform the operation for religious reasons.

It is estimated that nationwide, 70 percent of doctors and nurses are conscientious objectors, a figure which rises as high as 90 percent in some provinces.

Read more: Why doctors in Italy refuse to give abortions

“For example, a woman might not get a response to an abortion request made through a state hospital for two or three weeks. Even then, requests are often rejected  and they are forced to move to other cities to try to get a response from a different health authority,” Agatone added.

Women in Italy are entitled to terminate a pregnancy within the first three months.

But when medics attempt to slow down requests, the women are forced into having an illegal abortion simply because they run out of time.

Whether or not the government will abolish the fines remains to be seen.

Reflecting the country's conservative stance on abortion, it has long failed to implement an EU law that has seen medical abortions provided in other European countries for women who are up to 61 days pregnant.

In Italy, medical abortions are only issued during the first 41 days of pregnancy – another fact which makes the process more difficult and encourages illegal abortions.