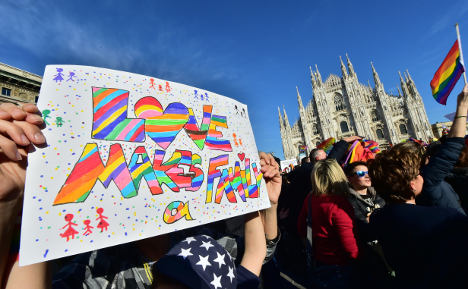 A demonstration was held in Milan on Sunday after the Five Star Movement back-tracked on its support for the civil unions bill. Photo: Giuseppe Cacace/AFP

The so-called stepchild adoption measure was removed after the Five Star Movement last week back-tracked on a pledge to support the bill in its entirety, Ansa reported.

Democratic Party senators have agreed to file a ‘maxi-amendment’ to the bill, which will be put to a confidence vote on Thursday.

The move also came after the smaller New Centre Right party, led by Angelino Alfano, said its support of the civil unions bill was dependent on the stepchild adoption clause being dropped.

Read more: Gay unions: will Italy blow this chance to boost its image?

Prime Minister Matteo Renzi said that while he defended a bid to get the Five Star Movement back on board, he said that “there was an unexpected about-face – they tricked us”.

“Now we can't risk sinking a law that is crucial to millions of Italians,” he was quoted by Ansa as saying.

Gay rights groups, some of whom demonstrated in Milan on Sunday, have insisted that the draft legislation will be worth little without equal adoption rights.

Opponents of the bill have filed hundreds of wrecking amendments, most of which aimed to remove the adoption provisions.

Meanwhile, opinion polls have suggested that while most Italians favour the principle of allowing gay civil unions, a majority are reluctant to extend adoption rights to same sex couples.

The Catholic Church has also been extremely active in lobbying politicians on the question to the point of being publicly rebuked for interfering by Renzi earlier this month.