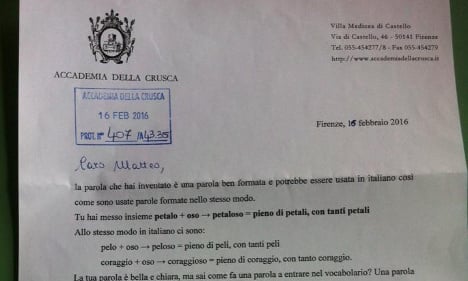 With its deep literary roots, the Italian language is often celebrated as one of the most beautiful, expressive languages in the world. But there's always room for an update.

Matteo, an Italian boy in his third year at a Ferrara primary school, came up with a new word which has received the seal of approval from Italy's 'language police', the Accademia Crusca, who are responsible for keeping the Italian language pure and compiling the official dictionaries.

The word? 'Petaloso', an adjective meaning 'petalled' . Matteo created the word by combining the noun 'il petalo' (petal) with the suffix 'oso', which is often added to nouns to create a corresponding adjective, for example 'famoso' and 'coraggioso'.

His inspiration struck during a class exercise practising descriptions, when he used it to describe a flower. His teacher, Margherita Aurora, liked the sound of the word so much that she suggested he submit it for evaluation by the Accademia Crusca – who came back with an encouraging reply.

“Dear Matteo,” their letter read. “The word that you’ve invented is a well formed word, and could be used in Italian. Your word is beautiful and clear.”

The Accademia Crusca explained a similar occurrence, recommending that Aurora and Matteo read Drilla, a children's book by author Andrew Clements. “It tells a story like your own; the story of a child who invents a word and tries to get it added to the vocabulary.”

Aurora said the reply was “worth a thousand Italian lessons,” and thanked her “little inventor, Matteo.”

But 'petaloso' won't be entering the dictionary just yet. The Accademia Crusca explained that to get a word officially accepted, “it must be used and understood by a lot of people”. Since then, hundreds of people have shared the hashtag ‘#petaloso’ to help Matteo and spread the news of his neologism and it was one of the top Twitter trends in Italy on Wednesday morning.

“The day of Umberto Eco's funeral, a child invents a new word. A perfect tribute.”

#petaloso is the word!

The Accademia Crusca is a linguistic institution for scholars, initially founded in the 16th century to establish conformity across a language which at the time was fragmented. They still work to ensure the purity of the Italian language, a task which involves weeding out 'corrupt' words from Italian.

Several other words which have been suggested by Italians are on the ‘waiting list’ to be included in the vocabulary. Many of these are to do with the Internet and social media, while others are hybrids of English and Italian.

Here are some of the best new entries up for consideration:

1. Crashare – A verb to describe a computer crash, replacing the current, less dramatic use of 'bloccarsi' or 'arrestare'

3. Apericena – A combination of 'aperitivo' and 'cena' (dinner), often used by students who have aperitivo as a main meal to save money

4. Swag – No attempt has been made to Italianize this loan word, but if it enters the dictionary we might expect to see variants such as 'swaggare' or 'swaggoso'

5. Fangirlare – A verb to describe girls who act obsessively over celebrities

6. Twitteratura – By blending Twitter with 'letteratura' (literature), this noun could describe the more poetic posts on the social network

7. Carpediemoso – Like Matteo's word, this is an adjective created by adding the suffix 'oso'

8. Friendzonnare – 'To put in the friend zone', when someone you are romantically interested in only sees you as a friend

9. Lollare – Italy doesn't have an acronym equivalent to 'Lol', but this  verb

10. Skuoncare – A word for 'skincare', which at the moment is translated in Italian as 'cura della pelle'

13. Pentastellato – An adjective to describe anything relating to political party 5 Star Movement

14. Spoilerare – To spoil the plot of a TV show, film or book. The noun form 'lo spoiler' is already popular in colloquial Italian

15. Gengle – A term for single parents which is a hybrid of 'genitori single', and also the name of a social network

16. Furbofono – Unlike most of the words on the list which have English origins, this is a more Italianized version of the noun ‘lo smartphone’

17. Shazzamare – To use the Shazam app to identify a song

18. Skillato – An Anglicized alternative to 'qualificato' to describe a skilled worker

20. Bullizzare – 'to bully' from noun 'il bullismo'. Currently there is no corresponding verb, so Italians use paraphrases such as 'prevaricare' (to intimidate) or 'vittimizzare' (to victimize)