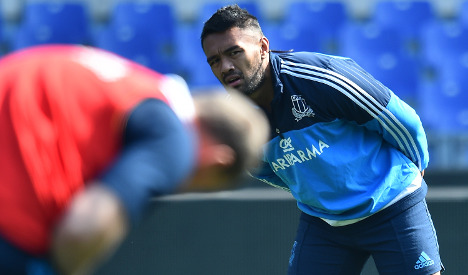 Kelly Haimona has been recalled for Italy in Saturday's match against Scotland. Photo: Gabriel Buoys/AFP

New Azzurri fly-half Canna largely impressed in his opening two Six Nations games for Italy – a narrow defeat away to France (23-21) and a home thrashing by tournament co-favourites England (40-9) two weeks ago.

But his failure to recover fully in time from a knock means New Zealand-born Haimona will make his first start of his year's tournament in a match that could decide the destination of the wooden spoon.

Haimona, who missed last autumn's World Cup due to injury after initially impressing for Italy throughout 2015, will partner scrum-half Edoardo Gori who, at just 25 years old, will earn his 50th cap against Scotland.

Having seen Italy come close to upsetting France in their tournament opener, Brunel has sought to replicate his starting XV from their Stade de France clash as much as possible.

Elsewhere, David Odiete replaces Luke McLean at full-back having impressedin Paris but missed the game against England due to a calf problem.

Meanwhile, lock Joshua Furno will make his first start of the tournament when he replaces George Biagi, who has been ruled out after suffering a fractured rib against England.

Italy have been given a boost, meanwhile, with the return to the front row of experienced hooker Leonardo Ghiraldini, who will earn his 81st cap against the Scots.

Italy's leading cap-holder, Martin Castrogiovanni (117 appearances), starts on the replacements bench, while emblematic captain Sergio Parisse will earn his 117th cap when he starts at No.8.

Scotland have beaten Italy nine times in 17 meetings between the sides, with Italy winning seven for one draw.

Vern Cotter's men will travel to Rome as favourites for Saturday's clash having come close in successive defeats to England (15-9) and Wales (27-23).