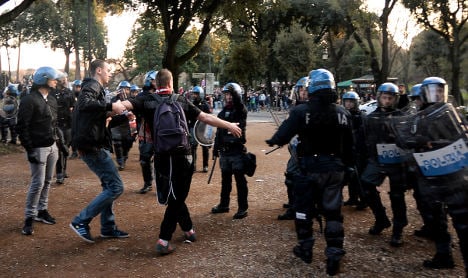 A year after fans of Dutch club Feyenoord caused millions of euros worth of damage to some of the Italian capital's historic monuments, authorities feared the worst when Lazio drew Turkish club Galatasaray in the last 32 of the competition.

Fans began fighting on Wednesday night, according to the Rome Questura or Constabulary, and a website report on gazzetta.it said around 300 Galatasaray fans began launching flares and smoke bombs at the Piazza Popolo – a popular meeting point before fixtures at the Stadio Olimpico – hours before kick-off.

One Turkish fan was taken to the city's Gemelli hospital with stab wounds to the buttock, while two others were arrested for possession of “important” quantities of illegal substances.

Those arrested have been handed a 'Daspo', meaning, in accordance with recently-introduced measures to combat football-related violence, they are banned from going near or in the stadium.

A statement from the Rome Constabulary said co-operation between police from both Italy and Turkey had limited the potential for damage.

“Thanks to international police co-operation, we were able to limit the potential for trouble by the Galatasaray fans in the hours between Wednesday night and Thursday morning,” said the statement.

Another 200 fans were forced to undergo identity checks, although all were later released by police.