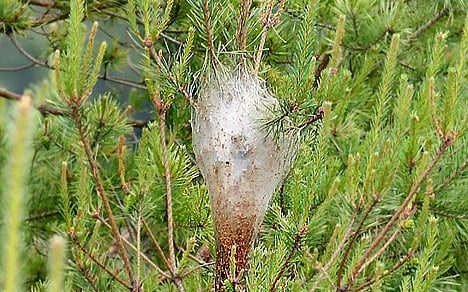 The furry caterpillars spend the winter living in funnel-shaped cobwebs which are filling up parks and gardens across Italy's northern regions including Piedmont, Liguria, Aosta Valley and Veneto.

Experts say the infestations are due to warmer winters.

“They are spreading across northern Italy and southern France because of climate change,” entomlnogist Chiara Ferracini told La Stampa. “Cold winters used to stop the them seasonally but now they are eating and breeding all year round.”

Apart from decimating foliage, each caterpillar releases thousands of tiny, toxic and harpoon-like hairs which are making life uncomfortable for residents.

The stinging hairs – which gather in their webs and are released into the atmosphere – cause painful red rashes, swollen eyes and irritate the respiratory tract.

Those allergic to the caterpillars' toxin can suffer severe and life-threatening anaphylactic shock if exposed to them.

Last month, a school in Venice was closed temporarily after nine children were taken to hospital after experiencing severe reactions to flying toxic hairs.

The problem is particularly pronounced in several towns in the Aosta Valley, where locals say they are being overrun.

“Here the plague has reached biblical proportions and has been getting steadily worse for two years,” a resident in the small town of Conclonaz told La Stampa. “We are all full of painful rashes and it hurts to swallow because we're constantly breathing in the hairs.” The Pine Processionary Caterpillar gets its name from its unusual behavioural trait of marching en-masse, forming a long trail of hundreds of caterpillars.