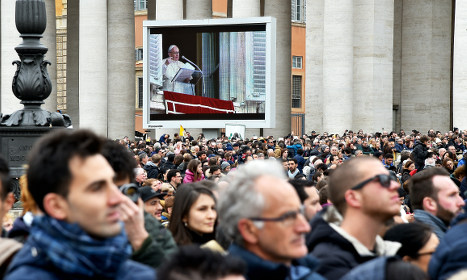 The pontiff used his address in St Peter's Square to hail the "generous help" offered by Greece and "other countries on the front line." Photo: Vincenzo Pinto/AFP

The pontiff used his address in St Peter's Square to hail the “generous help” offered by Greece and “other countries on the front line”, saying the situation “required cooperation among all nations”.

Nearly 120,000 migrants have arrived in Europe so far this year, according to the latest figures from the UN refugee agency, adding to the one million who made the perilous journey in 2015, mostly across the Aegean Sea from Turkey to the Greek islands.

The influx has triggered rows and bitter recrimination among European Union states at odds over who should take in the newcomers.

“My prayer, and also certainly yours, does not forget the crisis of the refugees fleeing wars and other inhuman situations,” the pope said.

“A unanimous response” from European countries is needed to “share the burden fairly”, he added.

Francis, who has made migrant rights a major theme of his pontificate, said EU states must act decisively.

Greece Sunday warned the number of refugees and migrants on its soil could more than triple next month, reaching as many as 70,000, as a limit on border crossings by Balkan countries left them “trapped” in the country.

On Friday four Balkan states including EU members Slovenia and Croatia said they would each restrict the number of migrants entering the country to 580.

The clampdown follows moves by Austria last week to introduce a daily cap of 80 asylum applications and let only 3,200 migrants transit the country each day.

The caps on migrant arrivals have fueled a bitter diplomatic row between Athens and Vienna and hand-wringing in Brussels.

Greece accuses Austria of unleashing a domino effect of border restrictions along the migrant trail that has led to a bottleneck on Greek soil.