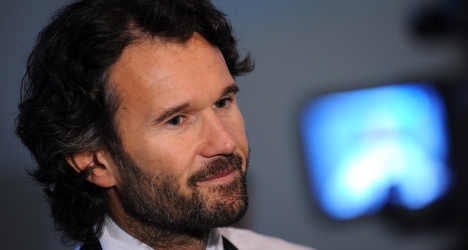 Chef Carlo Cracco has been reported to police for cooking pigeon during a Masterchef episode. Photo: Giuseppe Cacace/AFP

Cracco cooked the bird as part of a demonstration for the shows' contestants in an episode aired on January 14th on Sky Italia.

But his mouthwatering meal angered the Italian Institute for the Protection of Animals and the Environment (Aidaa) president Lorenzo Croce, who reported the three-time Michelin-starred chef to police in Milan for inciting people to break the law.

“Nobody doubts that Cracco is a great chef,” wrote Croce in his police report, published on Aidaa's website on Sunday.

“However, going on television and cooking a dish of pigeon, an animal protected by national and European laws, is a criminal act which we couldn't ignore.”

Croce based his complaint on the so-called Birds' Directive – a segment of EU law last updated in 2009 which protects wild birds and their habitats from threats such as poaching, capture and poisoning.

“Diffusing the footage is criminally instigating citizens to commit criminal acts by inviting them to break laws that protect wild animals,” he wrote.

A video below shows the offending meal.

But not everyone was impressed with Aidaa's actions: least of all their own followers on Facebook, some of whom quickly pointed out that the chef was legally allowed to cook a farmed pigeon.

Fans criticized the animal rights' organization for wasting public time and money with such trivial accusations, although the comments were later removed.

Roberto Ciambetti, president of Veneto's regional government, also leapt to the defence of Cracco, who was born and raised in the province.

“The EU law only covers wild animals,” he told Il Fatto Quotidiano, “I presume Cracco cooked a farmed pigeon – so I'm not sure why you would report him.”

This isn't the first time the Italian chef has provoked ire – in February last year he was forced to apologize for daring to suggest garlic could be added to the amatriciana‬ pasta dish recipe.