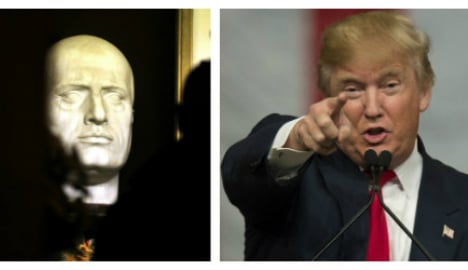 Trump's official Twitter account retweeted a quote from an account under Mussolini's nickname, Il Duce, which even has as its profile photo a portrait of the famously bald dictator with Trump's wispy hair photo-shopped onto his hairless pate.

The quote read: “It's better to live one day as a lion than a thousand years as a sheep,” a saying often attributed to Mussolini, who was fond of the expression and used it in a 1922 speech.

“@ilduce2016: “It is better to live one day as a lion than 100 years as a sheep.” – @realDonaldTrump #MakeAmericaGreatAgain“

“It is better to live one day as a lion than 100 years as a sheep.” – @realDonaldTrump #MakeAmericaGreatAgain

Journalism professor Christian Christensen suggested that the tweet was just another extension of Trump's right-wing views, which include banning Muslims and building walls to keep out migrants.

Other Twitter users mocked Trump for his lack of political nous, suggesting the tweet would do little to win him votes.

statistically speaking, you & I both know people who will vote for the “Mussolini had interesting quotes” guy https://t.co/tCilT0LBp0

When asked about the retweet, Trump told NBC news that he had known the expression was a Mussolini quote before he shared it from his account.

“I know who said it. But what difference does it make if it's Mussolini or anybody else?” Trump asked.

“We do interesting things, and I sent it out. And certainly, hey, it got your attention, didn't it?”

It later emerged that the retweet had been part of a ploy led by American journalist Ashley Feinburg, who had been trying to see if Trump would retweet Mussolini for months.

The idea was that Trump would eventually retweet one – a theory that proved to be correct.

On Sunday, after 2,000 tweets had already been sent to his account, he finally retweeted Mussolini.

The incident is not the first time that association with Fascism and far-right groups has created problems for Trump.

In January, Anne Frank's stepsister, Eva Schloss, told reporters in Washington that Trump was “acting like another Hitler by inciting racism.”