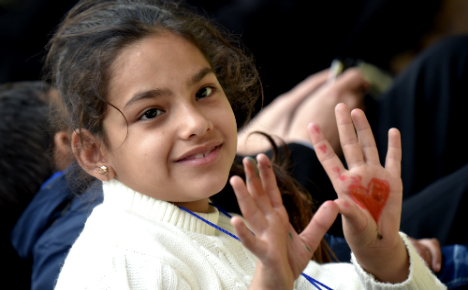 As several European countries seek to close their borders and accusations fly that Austria and Balkan states are abandoning Athens to refugee chaos, Italy's foreign minister insisted it was time to provide open passage.

“We don't need in this moment to raise walls, to have new fences, to have unilateral decisions,” Paolo Gentiloni told the foreign press in English as close to 100 Syrians, mainly parents and children, arrived at Rome's Fiumicino airport.

Humanitarian crossings, by which refugees are flown directly into Europe from camps in Lebanon, not only save people “from smugglers, from human traffickers, from the risks that they run in their route towards Europe”.

There were tears as adults carrying toddlers in their arms, wrapped in blankets or clutching toys, were met by volunteers who hugged them. While a few children hid their faces, most waved and smiled to the international media.

Marco Sandrone, an Italian volunteer holding a four-year old boy and his fluffy teddy, said the families had suffered “shrapnel, bombs, attacks”, and had spent years living in refugee camps, with several toddlers born there.

It was the first group arrival, after a family came at the start of the month with a child suffering from eye cancer.

'Chance of a better life'

“Everything you say about war… You can't describe the whole thing because it is a big, big disaster,” said Nakhle Abboud, a Syrian refugee who said his group could not wait to start their new lives in cities from Rome to Venice.

“You can see from the people here, the sadness on their faces. They need a chance to live a better life,” said Abboud.

The programme is aimed at the most vulnerable members of asylum-seeking groups — from single mothers to pregnant women, handicapped people and sick children – and should see 1,000 people of various nationalities brought to safety in Italy over the next two years, a spokesman for Sant'Egidio said.

The costs – of hospitality, legal aid and Italian lessons for example — will be covered by the non-profit organisations, drawing mainly on religious donations, while families will be housed initially with volunteers.

Some 120,000 people have crossed over from Turkey to Greece on rickety boats since the start of the year, with another 9,000 or so migrants arriving in Italy by sea from Libya, according to the UN refugee agency.

Over a third of migrants crossing the Mediterranean are children, with at least 60 youngsters dying during the crossing since the beginning of January.

Gentiloni said the corridors, if brought in across Europe, could make a significant difference but would not be enough to curb the migrant crisis.

Other essential elements were “cooperation with Africa, the ceasefire in Syria, contributing to stability in Jordan and Lebanon, and help(ing) Turkey with migrants. And sharing the burden of migration within Europe.”