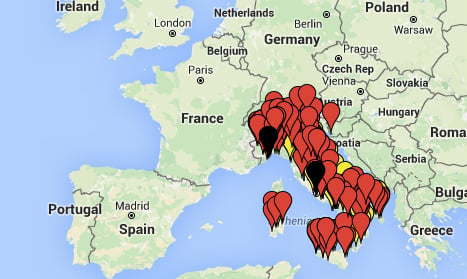 The map of Italy below paints a highly disturbing picture.

In the last decade alone, there have been 120 definitive convictions, marked on the map by red pins, against child abusers among the clergy.

Yellow pins mark instances of abuse that have been confirmed by a court, but the perpetrator has not been sentenced, most commonly due to court cases expiring under the statute of limitations.

Black pins mark cases in which foreign priests in Italy, who are under investigation abroad, are being protected by the Vatican.


Cases can be found in all areas of the country. Photo: L'Abuso

L'Abuso, an Italian association for the victims of paedophilia by priests, collected the figures from court data.

But the cases shown on the map are just the tip of the iceberg, the company's chief, Francesco Zanardi, told The Local.

“The actual scale of the problem is unknown, and we only have data for the last decade – but it gives an idea of how widespread it is.”

Zanardi hopes the map will help convince Italians of the need to finally bring child abusing clerics through the civil justice system.

“The Italian government has a treaty with the Vatican which means priests are not obliged to report child sexual abuse. In other countries that is a serious crime in itself – but in Italy it's just the norm.”

The majority of Church child abuse investigations in Italy are therefore carried out behind a wall of secrecy in the Vatican's ecclesiastical courts.

Once found guilty by a Vatican court, most abusive priests do not end up not being defrocked and incarcerated. Instead, they are sent to a new diocese where abuse can occur again.

This process was even actively encouraged by the institution itself when Cardinal Joseph Ratzinger sent a letter to all bishops in 2001 encouraging them only to report suspected abuse cases to the Vatican's courts on pain of excommunication. Ratzinger became Pope Benedict XVI four years later before resigning in 2013.

But Italians are becoming more critical of the Church's efforts to deal with paedophilia internally, thanks to notable media coverage of the problem.

Firstly, the ongoing investigation into Vatican finance chief George Pell, who is still working for the Church despite reams of evidence suggesting he covered up years of abuse while working as a priest in the Australian state of Victoria.

Secondly, Sunday's Oscar success of the film 'Spotlight', which scooped two awards for Best Film and Best Screenplay. The film tells the story of how a team of reporters working for the Boston Globe first exposed endemic child abuse in America in 2003.

“I'm pleased that ongoing investigation into Cardinal Pell and the recent success of Spotlight have the Italian media talking more about the issue, but a lot more needs to be done,” Zanardi said, adding that he doubted Pope Francis would do anything to change the laws surrounding the reporting of abuse.

Since becoming pontiff in 2013, Jorge Mario Bergoglio has tried to improve the Catholic Church's image, but critics say he has failed to address the problem of child abuse sufficiently and has not done enough to create a dialogue with victims.

“We've known about child abuse in the Catholic Church for 15 years  and it's time to face up to it. The Church needs to be forced to take its child abusers to civil courts – but if that happens it will be a miracle, no pun intended.”