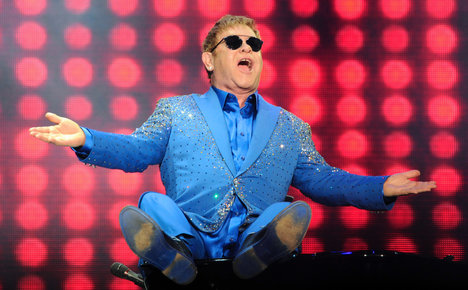 Elton John will play a concert at Pompeii this summer. Photo:Tasso Marcelo/AFP

The 68-year-old will perform live for a crowd of just 2,000 people at the Amphitheatre of Pompeii on July 12th.

The amphitheatre is the oldest stone building of its kind, built in 80 BC.

Until 79 AD, when the city was buried by the erupting Mount Vesuvius, thousands of ancient Romans regularly crammed inside to watch gladiators do battle.

Sir Elton will be the first global music icon to play Pompeii since UK prog rockers Pink Floyd, who recorded Live at Pompeii in 1971, but did not perform in front of an audience for the occasion.

But the archaeological superintendent of Pompeii, Massimo Ossanna, has long made clear his desire to bring more live music to the ruins to raise the profile of the venue.

“It's been our aim to start using the amphitheatre as a live music venue for the last two years so we're really excited about the event and hope to have more information soon,” a spokesperson for Pompeii told The Local.


The venue is one of the world's best preserved Roman theatres. Photo: Wikimedia.

Other historic sites, such as the ancient theatre of Taormina, regularly host global names.

But opening up Italy's historical treasures to global acts hasn't been without controversy.

In 2014, the Rolling Stones paid just €8,000 for the privilege of playing at Rome's Circus Maximus, a price agreed with the former mayor Ignazio Marino.  Thanks to the scandal, the cost of hiring the venue has been raised to at least €200,000. American rocker Bruce Springsteen will play there in July.

“Of course, every time a concert is played in a cultural site like Pompeii the law means the artist must pay royalties, which go towards maintaining our cultural treasures,” the spokesperson added.

Sir Elton is no stranger himself to sparking controversy in Italy. In 2010, the star received €750,000 of EU money from the city of Naples to play a free concert in the city centre.

The city was later ordered to reimburse the EU for using its funds in an inappropriate way.

But the singer, who has 27 multi-platinum albums to his name and has sold over 250 million records, will no dount do much to raise the profile of the venue, located at Italy's second most-visited tourist attraction, after the Colosseum.

It is not currently known how much a ticket will cost,  but given the limited amount available they are likely change hands for hundreds, if not thousands, of euros in the run-up to the concert.

For his part, Sir Elton is expected to play some tracks from his latest album, Wonderful Crazy Night, as well as belting out the classics from his repertoire.

In addition to the concert at Pompeii, the star has also confirmed two other shows in Italy. On July 15th he will play Piazza Colbert in Barolo, Piedmont and on July 16th he'll perform at Piazzola sul Brenta, in the region of Veneto.