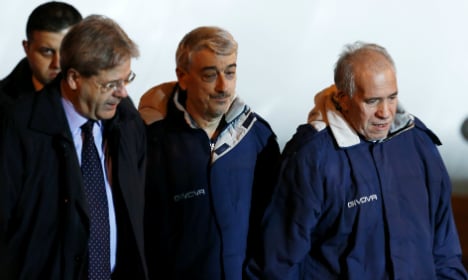 Gino Pollicardo, 55, and Filippo Calcagno, 65, were met by relievedrelatives at Rome’s Ciampino airport in the early hours and were whisked away to be debriefed by Italy’s foreign ministry and intelligence services.

They were among four employees of Italian construction company Bonatti whowere kidnapped in the Mellitah region west of Tripoli in July. Italian media reports suggested all four had been close to being freed, before plans went awry.

On Thursday, the day before Pollicardo and Calcagno’s liberation, Italysaid the other two, Salvatore Failla, 47, and Fausto Piano, 60, had likely been killed in clashes between jihadists and local militiamen.

“The Italian state has failed. The liberation of the two hostages was paidfor with my husband’s blood,” Failla’s widow Rosalba said Saturday, demandingher late husband’s body be returned to Italy as soon as possible.

Italian media reports said Piano and Failla, who had been separated fromPollicardo and Calcagno, had been in an Islamic State group convoy that was attacked by militiamen from Fajr Libya (Libya Dawn), the armed wing of the non-recognised government based in Tripoli.

While the murders increased pressure in Italy for the country to sendspecial forces to Libya, Prime Minister Matteo Renzi cautioned that any intervention would first need parliament’s approval, and Rome would not be rushed—a sentiment echoed Sunday by Foreign Minister Paolo Gentiloni.

“We need to avoid Libya sinking into chaos where tragic episodes like thisone involving our hostages can proliferate,” he said in an interview with Il Sole 24 Ore daily.

However, “it must be clear that there are no apparent shortcuts, musculardisplays. It’s true, time is short, but there is no quick war at our door.

“The government is aware of the errors of the past and is working to createthe conditions for stability in Libya,” he said.