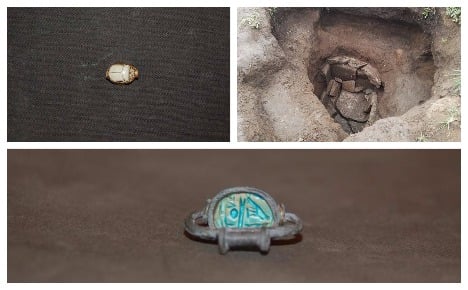 The tomb of a possible Etruscan princess has been found in Italy. Photo: Archeological site of Vulci

The ancient tomb was found in a burial chamber three metres below the ground in front of the ticket office at the archaeological site of Vulci in Lazio, which was once an important Etruscan city.

But historians faced a race against time to stop the treasure from being pilfered by illegal diggers.

“We had no idea the tomb was there, but carried out an emergency dig last month after we noticed looters had excavated another tomb that was above the princess's tomb,” 45 year-old site worker Tecla Del Papa told The Local.

“The robbers had revealed, but not entered, the tomb below, so thanks to them, we were able to quickly find the burial chamber and quickly excavate it,” she added.

Inside the tomb, archaeologists found the bones of a young girl wrapped in a fragile cloth.

Her remains were surrounded by valuable jewellery, pots and jars, some of which had been acquired on the international market.

She had been buried with a Phoenecian amber necklace and two Egyptian scarabs made of gold, ivory and silver –  beautiful and highly elaborate pieces that attest to the artistic prowess of the ancients and the wide extent of the seafaring Etruscans' trade links.

They also mean the grave belonged to someone very important.

“Certainly such items lead us to believe that she was a princess, if not someone very important in society,” Del Papa added.

Archaeologists are now trying to discover who the young girl was and what kind of life she lived 2,800 years ago.

The items have been taken to an on-site laboratory for restoration and will be on display for visitors to Vulci this summer. More extensive digs at the grave site are planned for April.

The mysterious Etruscans, a collection of pre-Roman tribes in Lazio, Tuscany and Umbria have fascinated archaeologists for centuries.

But very little is still known about them.

At the ancient city of Vulci, 80km north of Rome, more than 15,000 tombs have already been excavated, shedding light on the lost civilization and revealing countless treasures.

But looters still represent a huge problem for Italian heritage. According to one Italian prosecutor, artworks from more than 100,000 raided tombs worth in excess of €460 million have been illegally taken out of the country.