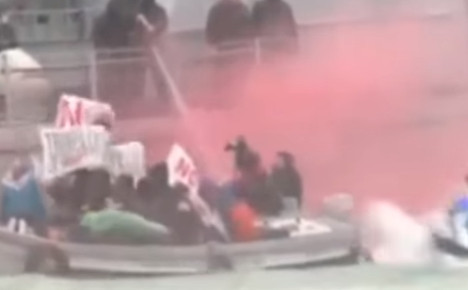 Waterborne officers sprayed high-powered jets onto around 20 small protest boats, some of which tried to ram through a blockade of police vessels, while demonstrators set off flares and chanted “cops out of the lagoon!”

The demo took place on the sidelines of a bilateral meeting between Italian Prime Minister Matteo Renzi and French President Francois Hollande, who signed an agreement to speed up the high-speed rail link's construction.

Critics say the TAV (Treno Alta Velocita or high speed train) between the French city of Lyon and Turin in northwest Italy will wreck a pristine Alpine valley and potentially release toxic asbestos particles into the environment.

The project is expected to cost €8.4 billion euros ($9.26 billion), 40 percent of which will be provided by the European Union under a scheme to promote strategic cross-border links, and is set to be completed by the late 2020s.

Supporters of the rail link say it will take a million lorries off Alpine roads each year once completed.

Critics, who have included France's public spending watchdog, have argued that the same result could be achieved with a far less costly upgrade of existing tunnels and rail tracks.