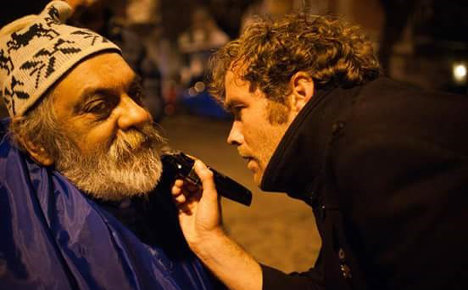 There was a time when Steve Barnes, a chef from Bradford, a city in England, was cooking for diners at his lakeside restaurant in the pretty Austrian village of St Wolfgang.

Now, he’s cooking hundreds of meals a week for Rome’s homeless, people with whom he shared the streets of the Italian capital for several years.

Barnes, 37, came to the city ten years ago, not long after his once thriving business fell victim to the credit crunch.

He worked in a pub and then as a tour guide, but became homeless after work dried up one winter and he couldn’t keep up with his rent.

Barnes soon found himself among the estimated 8,000 people either scrambling for an overnight stay in a shelter or bedding down for the night under the bridges of the river Tiber, on the steps of a monument or under the massive colonnades of St Peter’s Square, designed by Gino Lorenzo Bernini to symbolize the outstretched arms of the church. “People don’t realise how easy it is to become homeless,” Barnes tells The Local.

“You think to yourself: ‘It can’t happen to me’ – but all that needs to happen is that you lose your job and can’t afford to pay the bills. All of a sudden, you’re on the streets.”

Barnes, who is currently living with a friend temporarily, now has one aim: to get 30 percent of Rome’s homeless off the streets over the next decade.

He hopes to reach that goal alongside Mary Stuart-Miller, a British expat who last year started Project Rome, a volunteer group for the homeless.

What began with Stuart-Miller cooking dozens of nutritious meals in her kitchen for the homeless or destitute near Rome’s Tiburtina train station on a Tuesday night has now morphed into a mission which sees the pair feeding over 300 a week, as well as travelling around the city delivering food, clothes, blankets and toiletries to those sleeping rough or in abandoned buildings. Stuart-Miller had previously volunteered with a Church-run charity, but felt she could do more, especially when it came to showing compassion to the homeless.

“Our main aim is to show kindness and generosity to people, and not make them feel ‘invisible’,” Stuart-Miller said.

“There is so much mental anguish too. You have to speak to people and take an interest – find out why they’re in this situation.”

Among the people they see each week is Paolo, an airline pilot whose life spiralled out of control after he lost his job and Fabrizio, a former lifeguard who sunk into a deep depression after his marriage broke down.

There is also 59-year-old Lorena, who was turned out of her apartment after her landlord re-rented it. She had worked for 30 years as a hotel receptionist before losing her job.

Then there’s another woman – a victim of domestic abuse – who, with her daughter, sleeps in the reception area of a hospital emergency unit each night.

Project Rome, which now includes a team of around 20 volunteers, works separately from the Sant’Egidio Community, a Catholic charity that provides shelters and soup kitchens across the city, along with medical services and places for homeless people to wash.

But, according to Barnes, who has slept on night buses and in the corridor of residential buildings, you have to be lucky to secure a bed each night at one of the 45 shelters.

Although the number of washing facilities for the homeless has risen over the past few years, people still struggle to find a place to wash, prompting Pope Francis to have showers installed near the Vatican last year.

“But there’s always a queue of about 50 people, and each shower lasts just five minutes,” Barnes says.

Some of the canteens also only work on a “first come, first serve” basis, with people jumping the queue and pushing and shoving each other for food.

“I understand what people really need,” says Barnes, adding that Project Rome has given him a purpose.

“Sometimes it seems to me as if others treat them like they’re feeding animals in a zoo.”

Apart from reducing the number of people sleeping rough, the aim of Project Rome, which is funded by donations, is to open a shelter of its own, where people can come and eat, wash, store their belongings and benefit from support services that will help them towards rebuilding their lives.

The shelter would be called 'Project Home'.

“We are passionate about achieving our goals and want to make it a reality,” Stuart-Miller says.

“With all the buildings there are in this city, there should be no reason for anyone to be sleeping on the street.”

If you would like to donate to Project Rome or get involved as a volunteer, click here or find them on Facebook – Project Rome – Tiburtina Tuesday.