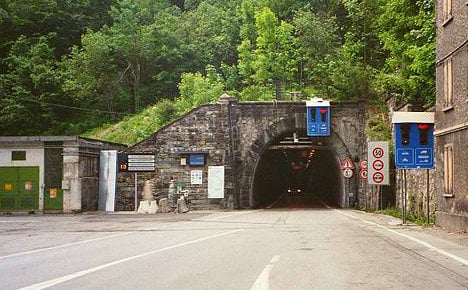 At this rate the tunnel will be finished in another 6060 workdays. Photo: Wikimedia

When opened in 1882, the Colle di Tenda tunnel was the longest road tunnel in the world – stretching over three kilometers – but is now too small to deal with the heavy flows of traffic.

A project to add a second lane to the tunnel was launched in November 2013, but it was two years before digging finally began.

The construction site has been operating 24 hours a day since then, but has only managed to move a measly 130 metres in 250 working days.

This leaves the other 3,032 to go – which if progress doesn't speed up will mean another 6,060 workdays before the project is finished.

The Italian daily, La Repubblica, quipped on Friday that the project deserved a world record for being the slowest moving construction site in the world.

Yet in spite of the sub-snail paced progress so far, technicians say they are confident they will still finish the €176 million project on time, opening the new lane by July of next year.

According to the experts, part of the problem has been that the rock near the tunnel entrance has been “too soft”- a fact which has slowed progress.

Italy has a precedent for slow tunnel building. Work on the 5.95 km Giunza tunnel between Umbria and Marche began in the 1970s but was never finished. It has been largely complete for the last 40 years, but still has no definite open date.