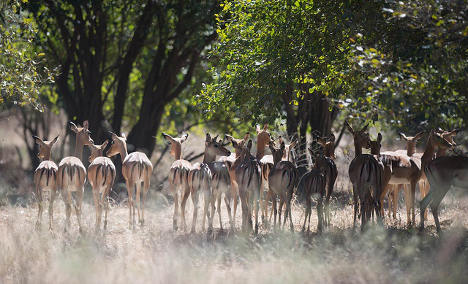 The Italian father and son were killed were shot dead by a wildlife ranger while on an anti-poaching patrol in Mana Pools, Zimbabwe. Photo: Peter Glanday

The two were killed in the Mana Pools national park in northern Zimbabwe on Sunday.

“Claudio Chiarelli, who was an accomplished professional hunter who brought European tourists to Zimbabwe, was accidentally shot with his son and they both died,” Emmanuel Fundira, head of the Safari Operators Association, told AFP.

“Claudio and some colleagues were on a trip with a parks anti-poaching unit when a ranger came from nowhere and shot at them while they were standing outside their vehicle.

“We understand it was a case of mistaken identity.”

An Italian embassy official, who declined to be named, said the Chiarelli, reportedly from Padua, had lived in Zimbabwe since 1982 and that his son was born in the country.

Italian media reports said Chiarelli was 50, and identified his son as 20-year-old Massimiliano.

“We can confirm it happened yesterday at Mana Pools national park but we are not aware of the exact details,” said the official.

“We are in contact with the family. It's a tragedy. The loss of a father and a son, and also for Zimbabwe for the bad publicity it will generate.”

The government parks department and police said they were investigating the incident.