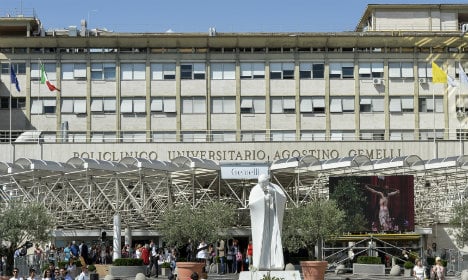 The gigantic growth was extracted during a three-hour operation late last week by the team led by Professor Riccardo Masetti at the Policlinico Agostini Gemelli hospital.

A histological exam is being carried out to understand more about the growth.

“It's an almost unique case due to the its huge dimensions,” Masetti told Andkronos.

Though the lump was massive by normal standards, it still falls some way short of the world record.

According to Guinness World Records, the record stands at a whopping 137.6kg – removed from the ovary of a woman by surgeons at America's Stanford University in 1991.

“Unfortunately, situations like this occur because patients are paralyzed by fear when they discover a growth and it creates a vicious circle,” explained Masetti.

As the tumour grows, people also develop a sense of shame and worry that they will get into trouble for not having spoken up about the problem sooner, he added.

President of the Lazio region, Nicola Zingaretti, congratulated the surgical team in a message, saying their work represented “another battle won in the region's fight against tumours.”