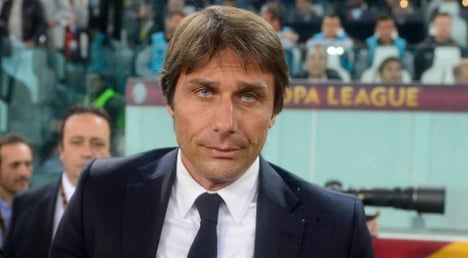 Italy coach Antonio Conte will give up his post after Euro 2016. Photo: Olivier Morin

The 46-year-old former Juventus coach took over the national team in August 2014 and secured their qualification for the European Championship.

Federation president Carlo Tavecchio told Italian media: “Antonio Conte has told me that at the end of the European championship, his job will end. He feels the need for the pitch, the everyday training, and this is something you can understand.”

It fuels speculation that Conte, who won three Serie A titles with Juventus, will be appointed Chelsea boss following the tournament from June 10th to July 10th in France.

British and Italian media reports say that Chelsea have an accord with Conte, even adding that he will take his long term assistants Angelo Alessio and Massimo Carrera with him to London.

Chelsea are having the worst season of Roman Abramovich's 13-year ownership. They sacked Jose Mourinho in December and interim boss Guus Hiddink has had to take the team from just above the relegation zone to 10th place.

Conte took over a demoralised Azzurri side following their humiliating first round exit from the World Cup in Brazil. He confidently succeeded in his first task of qualifying for the European Championships.

Italy advanced to the finals with ease by dominating their group which included Bulgaria, Norway, Croatia, Azerbaidjan and Malta, with seven wins and three draws.

Conte's Italy defence, with a Juventus core of Gianluigi Buffon, Leonardo Bonucci and Andrea Barzagli, proved solid, the coach has come under fire for his lacklustre forward line that managed just 16 goals in 10 qualifying games.

Three months before the tournament gets underway, the team remains a work in
progress.

In France, the Italians have been drawn in Group E along with Belgium, Sweden and the Republic of Ireland.

Italy were beaten by world number one ranked team Belgium in a friendly last November, demonstrating the gap between Conte's side and the top European teams.

Conte has also clashed with Italian football chiefs. He had hoped to organise a training camp in February and wanted the Italian Cup final brought forward to allow international players involved to take holidays.

Both requests were turned down to Conte's fury.

Former Italy coaches Roberto Donadoni and Cesare Prandelli have both been named as possible replacements for Conte along with Claudio Ranieri, manager of surprise Premier League leaders Leicester.