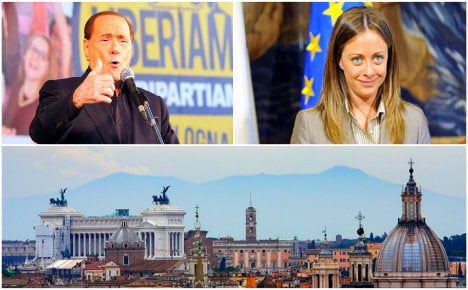 Berlusconi said being mayor of Rome is no job for a mother. Photo: Wenjie Zhang/Andreas Solaro/Gianni Schicci/AFP

The comments came amid a spat between his Forza Italia party and the Northern League over who the two parties will endorse as the candidate to lead a centre-right coalition in the upcoming mayoral elections.

“It's clear to everybody that a mother can't do that job,” Berlusconi told Radio Anch'io on Monday, referring to the Northern League's favoured candidate, 39-year-old Giorgia Meloni, who recently announced she was pregnant.

His comments were met with a wave of criticism and prompted fierce debate on the subject of sexism in politics.

“When will they ask a male candidate to withdraw for not being telegenic enough, or because he needs to be a father?” asked Italy's Constitutional Reform Minister, Maria Elena Boschi.

Supporting his endorser's comments, Bertolaso also told LA7 TV on Monday that Meloni should “focus on being a mum” instead of running for mayor.

Meloni served as Youth Minister as part of Berlusconi's fourth government, and at the time was the youngest MP in Italy's history.

She now leads the nationalistic Brothers of Italy party.

Both Berlusconi and Bertolaso object to Meloni, not because they doubt her political prowess, but because she is pregnant.

“The city is in a terrible state,” Berlusconi said, referencing the mountainous problems that the next incumbent will have to deal with.

“Being mayor of Rome means spending 14 hours a day between travelling around the city and your office.”

The 79-year-old then went on to attack the Northern League for trying to force Meloni into the mayoral race.

“There are people who, due to political selfishness, are pushing her to do this at her own detriment,” he added.

But Meloni was quick to defend herself.

“I hope to be an excellent mother,” she was reported as saying in La Repubblica. “Like all the other women, who between a thousand challenges, manage to combine work and motherhood.”

As the storm blew up, Bertolaso spoke to Radio Anch'io to downplay his comments, saying he had made them “as a joke.”

“It's all a storm in a teacup. A mother would make an excellent mayor of Rome, but at the moment she [Meloni] is pregnant and needs to be protected and not stressed from morning to night.

“No one can accuse me of sexism – my record as a politician backs it up.”

Other political groups have already announced their nominees, and without a candidate the centre-right is losing ground in its campaign.

An official date for the elections has not yet been set, but vote has been mooted for Sunday June 12th.