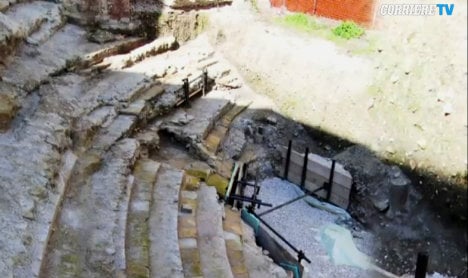 The theatre was discovered under a derelict building in 2001. Photo: Screengrab/Corriere

“The original builders most probably knew what they were building on, but they were different times,” Fano engineer Salvatore Vittorio Russo told Corriere della Sera.

Today, laws prohibit sites of archaeological interest from being developed, something the building's owners – a consortium of local businessmen – discovered to their chagrin.

Fifteen years ago they gained permission to turn the uncovered 1,830 square-metre ex-factory into 22 apartments.

“Before the project could get underway the council asked to perform a geophysical scan and found the remains of the theatre under the factory floor,” Russo explained.

It was quite a find.

Archaeologists suspect the full structure once stood some 20 metres high, 66 metres wide and could accommodate up to 10,000 people, making it one of the biggest Roman theatres in the region.

But in spite of its majestic scale, nothing more was done to excavate the ruin. Instead, Fano's long-lost amphitheater has lain exposed to the elements for more than a decade.

The theatre remains behind closed doors, in the heart of the abandoned factory, its impressive terraces adorned with dead animals and weeds.

The flimsy plastic sheeting which covers the structure has worn away in parts, exposing its ancient stone to the elements. The problem? A bureaucratic log-jam and the quest for profit.

After the new-found segment of the theatre was excavated, the council removed the building consortium's permit to build on the site, which remained private property.

After a series of lengthy negotiations with the council, the owners were offered the right to develop a much larger, 8144 square-metre site on the edge of the town where they could build 130 homes.

However, the generous offer came at the height of the financial crisis when the prospect of selling so many homes seemed bleak, and so the consortium refused.

Subsequent negotiations with changing local councils have done nothing to unblock the impasse.

“Until we own the site, we can't do anything with it, but it would be perfect for an interactive museum,” regional councillor Caterina Del Bianco told Corriere della Sera.

“We would need to find between €2 million and €3 million in funds to develop the site for which there are many options available between national and European funds,” she added.

For now, any ideas of transforming the derelict site into a tourist attraction which could take centre-stage in Fano must remain waiting in the wings.