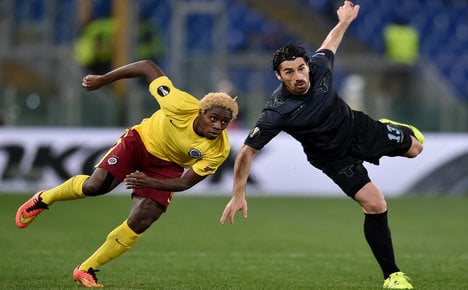 Lazio had hoped to be left flying the flag as Italy's only survivors in Europe on Thursday after winning the first leg of their last 16 Europa League tie in Prague 1-0.

But three first-half goals put Zdenek Scasny's visitors firmly in the driving seat to the frustration of Lazio's fans.

Konate was eventually substituted on the hour but not before he was targeted with sporadic monkey chants – an incident that could see Lazio sanctioned by UEFA disciplinary bosses next week when they meet in Nyon, Switzerland.

Lazio captain Lucas Biglia said after the game: “It's shameful.”

Having finished last season with a flurry to beat Napoli to the last Champions League qualifying place, only to fail to reach the competition, Stefano Pioli's Lazio side has been remarkably inconsistent this season.

Squad harmony is reported to be at an all-time low as they chase an unlikely place in Europe next season amid rapidly dwindling attendances and dissatisfaction with club president Claudio Lotito.

Bosnia defender Senad Lulic said the disunity of Lazio could be seen after the final whistle on Thursday.

Speaking to Gazzetta dello Sport, he said: “It's not normal there were only four of us (players) left on the pitch to be whistled at, while all the others scarpered.

“It shows you how much of a team we have.”

Rome-based newspaper Il Tempo gave short shrift to Lazio's performance with the headline 'RidicoLazio', suggesting in an editorial that Lotito and Pioli's stay at the club would be further contested.

It is the first time since the 2000-2001 season there is no Italian club at the quarter-finals stage in Europe.

Napoli and Fiorentina's Europa League campaigns were ended by Villarreal and Tottenham respectively at the last 32 stage a fortnight ago.

Roma and Juventus, Italy's representatives in the Champions League, exited to Real Madrid and Bayern Munich respectively at the last 16 stage.