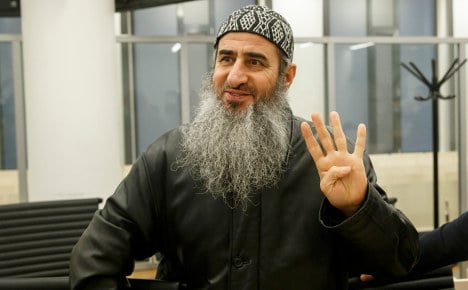 The 59-year-old Islamist still risks extradition to Italy, however, where a terror charge awaits him. Krekar is listed as a terrorist by the United States and United Nations.

In November, Italian police swooped on a European jihadist network that was allegedly planning to try and spring Faraj out of detention. Seventeen people were targeted in the raids across Europe – 16 Kurds and a Kosovan. Six of them were arrested in Italy, four in Britain and three in Norway.

Krekar faces charges in Italy for terrorist plots and is suspected of leading the organization Rawti Shax, an offshoot of the jihadist group Ansar al-Islam.

Italy has filed an extradition request for Krekar and two others, but the Islamist’s lawyer found to blocked it.

“I have said that he is not going to be extradited to Italy and I’m going to work on that,” Brynjar Meling told the Norwegian news agency NTB.

Krekar was sentenced by the Oslo District Court in October to one-and-a-half years in prison for threatening the life of Halmat Goran, a Kurd who had burned a copy of the Koran. On Thursday, jurors at the Court of Appeal disagreed that Krekar had threatened the man.

Krekar’s comments on national broadcaster NRK came in the same interview in which he praised the Charlie Hebdo terror attacks in Paris.

“The cartoonist has become an infidel at war, and therefore it is permissible to kill him,” Krekar told the interviewer, arguing the attacks were justified under Islamic law.

“As he has trampled on our dignity, our principles and beliefs, so he must die. Anyone who does not respect 30 percent of the world's population has no right to live.”

Krekar had issued a death sentence, a fatwa, on Goran and said that anyone aware of the sentence “may kill him”. The Islamist also offered to send a “gift” to whoever did the deed.

His comments came just one month after he finished a two year and ten month prison sentence for his 2012 conviction on charges that he threatened Prime Minister Erna Solberg.

Solberg was the minister of local government at the time and had signed his expulsion order in 2003 because he was considered a threat to national security.

“Norway will pay a heavy price for my death,” he said during a meeting with international media in June 2010.

“If for example Erna Solberg deports me and I die as a result, she will suffer the same fate,” he said in Arabic.

“I don't know who will kill her: Al-Qaeda, Ansar al-Islam, my family, my children. I don't know… But she will pay the price.”

Although Norway’s authorities wanted to expel him from the country on national security grounds as long ago as 2003, they are prevented from doing so but because he faces the death penalty if he is returned to Iraq.

The founder of the Ansar al-Islam group, Krekar has lived in Norway since 1991. Last year, authorities banished him to a a refugee centre in Kyrksæterøra, a village of 2,500 people situated 500 kilometres (300 miles) from the capital.