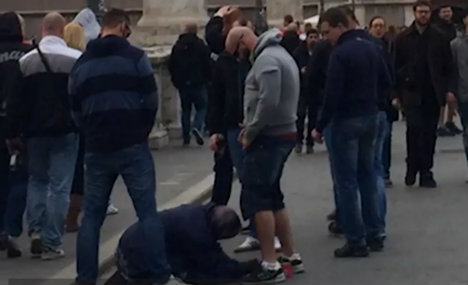 The incident happened on Thursday afternoon, on the bridge in front of Castel Sant'Angelo –  a popular tourist spot in the city centre, Corriere Della Sera reported.

Two fans were filmed approaching a female beggar, who was dressed in rags and hunched on the ground with her head bowed. The men then began to urinate on her, as scores of tourists looked on indifferently.

The woman quickly got up and moved out of the way before she was given some change by a sympathetic stranger.

“I didn't see the urination but I saw some of the fans at lunchtime near the Trevi fountain,” a local resident told The Local. “They were already drunk and were shouting in a very threatening way.”

The Prague fans were in town ahead of a clash with Lazio in the last 16 of the Europa League competition, a match which saw Lazio crash out of the competition following a 3-0 defeat.

This is not the first time hooligans have run amok ahead of a European fixture in Rome.