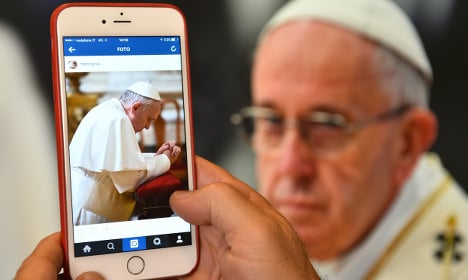 Pope Francis met Instagram chief and founder Kevin Systrom at the Vatican last month. Photo: Gabriel Bouys/AFP
“I want to walk with you along the way of God's mercy and tenderness,” he wrote on the photo-sharing platform, under the account name franciscus.

“Instagram will help to tell the story of a papacy, letting everyone who wants to come along and get to know the papacy of Pope Francis,” said Vatican communications chief Dario Vigano.

Photos from Vatican daily the Osservatore Romano will be posted, as well as brief videos, “to try to show details which demonstrate .. aspects of intimacy and inclusion which Pope Francis lives every day,” he said.

Within an hour of posting his first picture, the pope had 100,000 followers.

Pope Francis met Instagram chief and founder Kevin Systrom at the Vatican last month. Instagram, which was acquired by social media giant Facebook in 2012, had over 400 million users as of the end of February.

The pope has some 30 million followers in nine languages on Twitter, which he joined in 2012 under the handle @pontifex — the word “pope” in Latin.