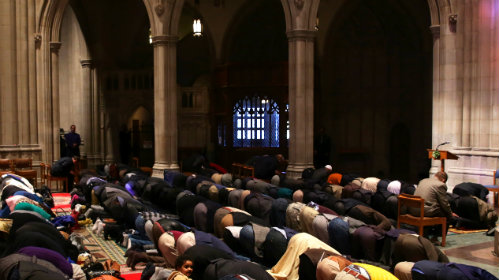 An Italian bishop has criticized one parish's decision to allow Muslim refugees to pray in a Catholic church. Photo: Alex Wong/Getty images/AFP

Biancalani told La Repubblica the decision to leave prayer mats next to the alter was part of helping the new arrivals feel at home.

“I don't see how it's a problem, we can hardly make them pray in the cellar,” he said.

“Besides, all they need is a prayer mat and a position facing Mecca.”

“Anyone wanting to pray in the church is welcome and if they want to go elsewhere, they can do that too,” he added.

But Archbishop Fausto Tardelli said the plan was a step too far that risked damaging attempts at integrating refugees into the local community.

“Offering a respectful welcome to people doesn't mean providing them with spaces for prayer in Christian churches. There are plenty of better and more appropriate places available,” La Repubblica quoted him as saying.

“They [Biancalani and Carmignani] need to act carefully to respect the resident population if they want to achieve true social integration,” Tardelli added.

Yet in spite of the bishop's harsh words Vicaforo's priests refused to perform a u-turn on their decision.

“We are trying to provide an example of what the Catholic Church can do to help out during the refugee crisis and hope that the other parishes in Pistoia choose to follow our example,” they said.