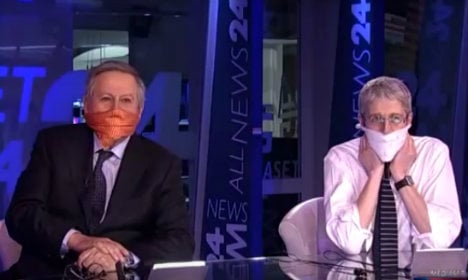 The 'silent protest' followed the Torino v Juventus derby on Sunday, when match referee Nicola Rizzoli made several glaring blunders in a hotly-contested fixture won 4-1 by Serie A champions Juventus.

Rizzoli, who officiated the 2014 World Cup final between victors Germany and Argentina, was not the only culprit, according to Gazzetta dello Sport, whose Monday report claimed it was “the worst Sunday (of refereeing)” this season.

But after Sunday's game, Rizzoli is perhaps looking forward to the international break more than his colleagues.

Torino had reduced the arrears to 2-1 with a 48th minute penalty that stopped Gianluigi Buffon's unbeaten run in the Juventus net at a new record of 973 minutes.

The hosts then scored through Maxi Lopez to level the match, although his goal was chalked off, as television replays confirmed, for an inexistant offside.

Torino were then denied a possible penalty when Alex Sandro slid in late to challenge Bruno Fernandes to the right of the Juve goal.

And when both Juventus defender Leonardo Bonucci and Torino's Kamel Glik should have been cautioned for a second time and sent off, Rizzoli kept his hand in his pocket.

Rizzoli's performance prompted claims from irate Torino fans that Juventus, who a decade ago were sent to Serie B for their role in a huge match-fixing affair implicating football officials and referees, continue to curry favour from officialdom.

Two years ago, another referee, Gianluca Rocchi was accused of bowing to Juventus in a bad-tempered clash that saw three players including (former) Roma coach Rudi Garcia sent off.

Torino coach Giampietro Ventura somehow kept his composure throughout a tense 90 minutes on Sunday, but let fly afterwards: “It's unbelievable to have lost in these circumstances. Fair enough they went 2-0 up, but after that I don't know what happened.

“Alex Sandro should have been sent off, and in the second half we levelled 2-2 only to see the goal chalked off.

“How can the referee get that wrong? I have great respect for Juventus, who are a great side but today I can't accept that. We need to be shown some respect as well.”

The two television journalists, Paolo Liguori, the head of Tgcom24 and Mario Giordano, the head of TG4, took their protest to the national airwaves.

Liguori, a Roma fan, and Torino supporter Giordano appeared on the TGCom24 programme with the scarves over their mouths to “stop ourselves making caustic remarks” against Italian referees and, in the process, thwart a possible defamation suit.